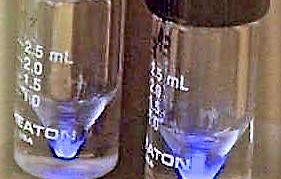 The Actinium is a chemical element that is part of the group of actinides . These make up the elements that have a higher atomic number , in turn they cannot be found in nature and their life span is quite short. All isotopes in the actinide group , including actinium, are fully radioactive .

One of the most outstanding characteristics of actinium is the fact that it is a radioactive metal, as are all actinides, although it has a silver color . Due to its high radioactivity it  glows in the dark with a bluish light.

The 227Ac isotope , which is only found in traces in the minerals of uranium , is a direct emitter of α and β particles  with a period of half – life of 21.773 years particle . Its traces are so low that one ton of uranium ore contains only one gram of actinium.

The behavior of this chemical element is very similar to that of the rest of the rare earths, especially  lanthanum , an element that is found just above it in the periodic table.

Actinium was famously discovered by a French chemist named André-Louis Debierne in the late 19th century, after being able to obtain the element through pitchblende . In the beginning, this chemist perceived it as an element extremely similar to titanium, and later this perception was changed to  thorium  in 1900.

By 1902 it was discovered, directly by  Friedrich Oscar Giesel , who perceived it as an element very similar to lanthanum and gave it the name of emanium in 1904 .

After having made the comparisons between these substances previously compared at the end of 1904 it was established that they were identical and the name proposed by Debierne was retained because it had priority.

Ended comparing with three other elements were discovered between 1898 and 1900 : the  polonium and radium  by Marie and Pierre Curie chemicals and the  radon a gas which is released during the radioactive decay of some heavier elements discovered the chemical German  Friedrich Ernst Dorn  for the year 1900, resulting in certain similarities thanks to their comparables for their radioactivities.

The chemical properties of actinium are:

The Actinium is a chemical element that can be purchased at any pharmacy, due to its radioactivity their use is limited only scientific organizations . The radioactivity of actinium exceeds 150 times that of radium , making it an excellent source of  neutrons ; but despite this, it does not have significant industrial applications due to its commercial limitations.

Thanks to it, francium , element number 87 of the periodic table, can be obtained , which is a radioactive alkali metal discovered in 1939 , which is obtained in very minimal quantities as a result of a specific decay process of the 227Ac isotope in the radioactive series that begins with  235U .

Within medicine, the 225Ac isotope is used in the production of  Bi-213  used in  radiotherapy to treat cancer . To achieve this, the 225Ac isotope is combined  with the monoclonal antibody lintuzumab which forms an alpha radiation emitting radioimmunoconjugate which It is abbreviated as 225Ac-HuM195 and has possible antineoplastic activity  .

Where is actinium found

Actinium is not easily found, it must be extracted from a short list of elements, these are: AcF3, AcCl3, AcBr3, AcOF, AcOCl, AcOBr, Ac2S3, Ac2O3 and AcPO4. All the elements listed above contain a structure extremely similar to those corresponding to lanthanum, which is why it is contemplated in all of them that actinium has an oxidation capacity of +3.

Are are small and rare traces of Actinium 227 Ac in uranium ores , but commonly only obtain quantities are achieved in milligrams, to remove it bombards 226Ra with  neutrons contained inside a nuclear reactor, which is followed by a disintegration of β- of the resulting 227Ra isotope .

Obtaining actinium can be achieved thanks to  the reduction of actinium fluoride with calcium, lithium or magnesium vapor at a temperature between 1100 and 1300 ° C. Another way would be through  the disintegration of 235U or  uranitite ( U3O8) . It should be noted that actinium was produced artificially for the first time at the  Argonne National Laboratory in Chicago .

The actinium 227, as he is known, because it is one element extremely radioactive , with obvious effects negative for reasons of highly harmful radiation health, even comparable in danger to the  plutonium , is extremely limited use. Only the intake of 1 milligram of this metal could cause cancer to the individual in less than 48 hours .

Its wider use has been seen in the developments of technology nuclear in which has accompanied it through small releases of radioactivity into the atmosphere , soil, oceans, seas, and water table, showing up worldwide in animal, plant and inert matter . Radiation passes from one species to another and is concentrated through the food chain, making other animals and humans subject to its damaging effects.

What is aluminum chloride?

What is a covalent bond?

What is a chemical compound?