There are several types of molecules, one of them is known by the name adenosine triphosphate. This is an organic molecule which means that it has carbon atoms that are linked to hydrogen atoms. It has a series of links with high energy levels and also plays a vitally important role in the metabolism process because it is responsible for carrying out the transport of all the energy necessary to keep the processes of the cells working properly. adequate. 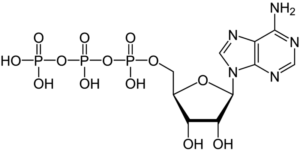 What is adenosine triphosphate?

Adenosine triphosphate is a type of organic molecule that is composed of an adenine ring, a ribose ring, and three phosphate groups and is responsible for the chemical reactions that need the energy to be carried out quickly.

Among the main characteristics that can be found in adenosine triphosphate, the following are mentioned:

Among its main properties, it is worth mentioning that adenosine triphosphate is a very soluble molecule when it is in contact with water and it does so through a chemical process known as hydrolysis. When it dissolves, it has the ability to release large amounts of energy.

Its reserves within the body only last a few seconds because despite being produced continuously, it is also needed by the body. When this process is blocked by some substance, death would happen almost immediately. It cannot be stored naturally, only through intermediaries that participate in the molecule’s production chain.

The structure of adenosine triphosphate is a nucleotide that has three phosphates, and two pyrophosphate bonds and is composed of several elements including:

The chemical formula that can be found in the molecule of adenosine triphosphate is C10H16N5O13P3.

Adenosine triphosphate has several functions of great importance for life, mainly for metabolism, a process carried out by all living beings. It has the ability to make energy costs but at the same time replace them efficiently, quickly, and continuously so that the process can continue.

It is also in charge of being able to provide the necessary energy to carry out various biological processes. It is also responsible for acting as a type of signaling molecule in all the processes that occur within the cell and for this reason, it is necessary so that the components of DNA and RNA can be synthesized correctly.

It is also part of the transfer of substances between membranes. It is then in charge of the transport of the molecules through the membranes, synthesizing the compounds that enter the organism, and of carrying out all the mechanical work.

It also participates in the process of synthesis of proteins which are made up of amino acids. It supplies all the energy that is needed to be able to carry out work related to movement and locomotion, as these are part of mechanical work, one of its main functions.

The synthesis of adenosine triphosphate is carried out through hydrolysis, which is a type of reaction that causes the molecule to break down when it comes into contact with water. This synthesis can be represented by the following formula:

In which Pi refers to the inorganic phosphate group, ADP to adenosine triphosphate. This process implies that large amounts of energy are released. All this energy that arises from the synthesis of adenosine triphosphate is then used in a series of reactions used in the metabolic processes carried out by cells since most of them will need the energy to function.

The main importance of adenosine triphosphate is that it is the main source of energy through which all cell functions can be carried out, including the synthesis of large molecules such as DNA and RNA. In addition, it plays a vital role in the proper transport of macromolecules in cell membranes, in other words, it directly intervenes in exocytosis and endocytosis, processes necessary for life.

It is also responsible for all the maintenance related to the structure of the cell, the contraction of muscles, and the processes related to all the energy needs of living beings, mainly those related to locomotion and respiration.

What are diazonium salts?