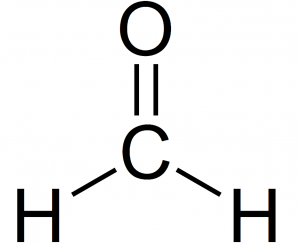 Aldehydes are organic compounds that have the functional group CHO and whose function is the carbonyl group -CO and whose formula is RCHO and which are obtained from the oxidation of primary alcohols.

The main characteristics of aldehydes are:

They are classified by family, in this way we have:

Its structure is flat trigonal since its main carbon has hybridization with 3 sp2 atomic orbitals and 1 p orbital. These orbitals are united with the atomic orbitals of the other carbons that are 1sp2-s, with hydrogen , 1sp2-sp2 and 1p-p, both with oxygen and, finally, 1sp2-sp3, with the radical . So the aldehydes have 3 sigma bonds and one pi bond and in this way the angles that form the bonds of the carbon with the three bonded atoms is approximately 120.

The general formula of aldehydes is: CnH2n + 1CHO

With respect to the nomenclature, the ending “-al” is added to the equivalent hydrocarbon. If there are two aldehyde groups, the ending “-dial” is added.  For three or more groups the prefix «formil-« is used.  There is also a traditional nomenclature for the most common aldehydes:

Those with few carbons have characteristic odors . For example, methanal is watery and gaseous. Most of them are liquids and the rest are solid. Their points of boiling are less than those with the respective alcohols having the same number of carbons. They have a lower density than water and the smallest ones have some solubility in water, but this decreases as the amount of carbons increases.

They have good reactivity. They exhibit addition , substitution, and condensation reactions .

Addition : happens when hydrogen is added and a primary alcohol is formed.

Substitution with halogens : it happens in aldehydes when they react with chlorine giving acid chlorides by substitution of the hydrogen of the carbonyl group .

They also behave as a reducing agent by oxidation of acids having the same number of carbon atoms. The reaction of aldehydes and ketones is known as nucleophilic addition .

They have a great influence on the world economy because thanks to them the perfume industry , for example, is so important. Alcohol is very important in the manufacturing of products in industries. These must be versatile in their reactions and accessible in price. Aldehydes are the main generators of simple alcohols .

They can be prepared basically by oxidation smooth the priority alcohols i os . They can also be obtained through the following processes:

The reactions that aldehydes can have are the following:

Aldehydes can have the following uses :

Some examples of aldehydes are as follows:

What is sodium sulfite?