In order to understand the definition of aluminum hydroxide, it is necessary to know what aluminum is . This is a type of metallic element found on the periodic table and is represented by the word “Al.” It is one of the most common elements that can be found in nature and in various compounds. Aluminum can be found as a hydroxide , which at the same time represents the most stable form in which this metal can be found under normal conditions. 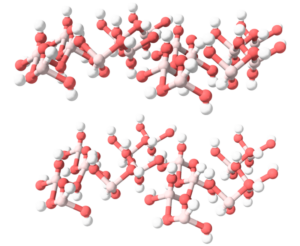 The aluminum hydroxide is one of the forms more stable in which can find the aluminum . In nature it can be found under the name of gibbsite mineral and is a fundamental part of bauxite .

The chemical formula for aluminum hydroxide is Al (OH) 3.

The nomenclature of aluminum hydroxide is established as follows:

Among its most relevant physical properties are the following:

Its most relevant properties are:

Aluminum hydroxide can, first, be found freely in nature as the mineral gibbsite . The main method by which aluminum hydroxide can be obtained is from the extraction of the mineral bauxite to which a process known as Bayer is applied , whose main objective is to achieve a separation between the hydroxides of aluminum from bauxite , the silica that become impure and iron oxides . The process that is followed is as follows:

One of the main uses of aluminum hydroxide is in the medical field as it is one of the best antacids that alleviates heartburn, indigestion and stomach upset problems. It is very useful in patients suffering from peptic ulcers , esophagitis , hiatal hernia and other stomach problems because it produces an effect that neutralizes the acids that are produced in the stomach.

It is also used as a phosphate chelator in order to control hyperphosphatemia (very high levels of phosphate in the blood) in both humans and animals. Precipitated , it is included as an adjuvant in vaccines because it manages to correctly absorb the proteins, preventing them from precipitating or adhering to the walls of the vial while it is stored.

It can also be used as an extinguishing agent as it has the ability to absorb large amounts of heat and at the same time, it releases water vapor. Its fire resistance make it effective as a type of smoke suppressant mainly on polyester, ethylene , acrylics, epoxy resin, rubber and PVC.

How is it taken

The dose to be able to take aluminum hydroxide as a medicine must be established by a doctor depending on the age, weight and health condition. It is important to shake the product well in case it is in suspension form and all the indications of the medicine must be followed to the letter. So overall , not indicated in children who are under five and adults , the usual dose is one to two tablets three times a day, especially 20 minutes or a hourafter food has been eaten . An extra dose may also be indicated in the event of a pain crisis . If you are taking the chewable tablets , chew them well before swallowing, and then drink a full glass of water.

The benefits that can be obtained by means of aluminum hydroxide are mentioned below:

In the pregnancy stage, aluminum hydroxide can be of great importance to treat those women who have serious problems with heartburn and gastroesophageal reflux when the diet and the change in the lifestyle of the pregnant woman do not solve the problem. It is noteworthy that despite being an important drug, not recommended its excessive use prolonged .

Among the main risks that can be caused by ingesting aluminum hydroxide are the following:

What is litmus paper?