Amino acids structure and groups are listed below with complete details

The structure of Amino acids include  group of organic molecules that contain the essential amine group (―NH2), the carboxylic acid group (―COOH), and the organic group R (or called a side chain) that are unique to each amino acid, which is the cornerstone of building proteins. The term amino acid is an abbreviation of αamino carboxylic acid. And each molecule contains a central carbon atom (C), called alpha carbon, so that both groups, amine and carboxyl, are linked. The remaining two bonds of alpha-carbon combine with a hydrogen atom, and group R. It looks like this:

Amino acids differ from one another in the specific chemical group R group.

Proteins are essential to the process of sustaining life on Earth. Proteins stimulate the majority of the chemical reactions that take place in the cell. It produces many structural elements in the cell, and contributes to linking cells together in tissues.

Some proteins act as contractile elements, making movement possible. Others are responsible for transporting essential materials from outside the cell into it. Antibody-like proteins protect animals from disease, and resist an intracellular (interferon) antiviral attack against viruses that have escaped their elimination via antibodies and other immune system defenses. And a lot of hormones are proteins. Last but not least, proteins control gene processes.

This grouping of essential tasks is reflected in a wonderful group of known proteins that are distinguished by their size, shape and charge. At the end of the nineteenth century, scientists discovered – despite the presence of many types of different proteins in nature – that proteins are produced by the process of (hydrolysis, that is, the compound of the compound with water intercourse – hydrolysis), a class of simpler compounds, which are the building block of proteins, called amino acids.

The simplest amino acid is called glycine, and it is also called because of its sweet taste (glyco, i.e. sugar). It was one of the first amino acids to be known, as it was isolated from protein (gelatin) in 1820. In the mid-1950s, scientists clarified the relationship between proteins and genes combined as 20 amino acids (called essential or common amino acids) are a building block All proteins. The last discovery (threonine) in 1935.

All amino acids are analog molecules except glycine. They are found in reverse optical analog forms (called enantiomers), that is, in the mirror. This may be similar to the relationship between the right hand and the left hand.

One of the symmetries is denoted by the symbol D and the other is the symbol L. It is important to know that the amino acids present in almost all proteins belong to the formation of L. This reflects the reality of the enzymes responsible for the synthesis of proteins, and they evolved to form the symmetric L only. Some D amino acids are found in microorganisms, specifically in the cell walls of bacteria and in many antibiotics, yet these are not created in ribosomes.

Another advantage of free amino acids is the presence of both the basic and acid groups in the alpha-carbon bond. And compounds such as amino acids, which act as bases or acids called (amphoteric).

One of the most effective methods for classifying essential (or common) amino acids is the polarity of group R (or side chain), that is, the distribution of the electric charge over them.

The first group of amino acids are: glycine, alanine, valine, leucine, isoleucine, proline and proline. Phenylalanine, methionine, and tryptophan. This makes them hydrophobic. In solutions diluted with water, (globular protein) is folded into a three-dimensional shape to hide the hydrophobic side chains within the protein. 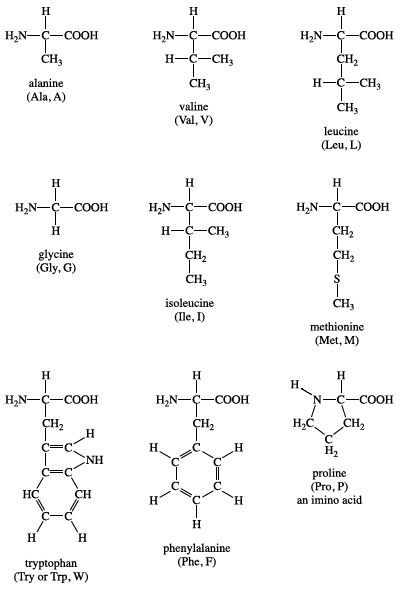 The second group is (serine), cysteine, threonine, tyrosine, asparagine and glutamine. The side chains in this group possess a spectrum of functional (functional) groups, however most of them possess at least one atom (nitrogen, oxygen, or sulfur) with the electron pairs available to make a hydrogen bond with water and other molecules. 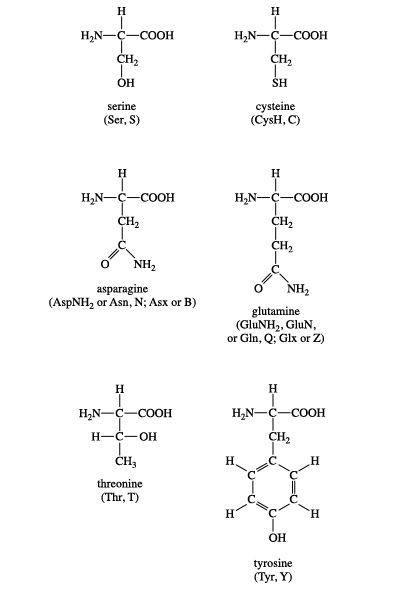 The amino acids in this group are: (aspartic acid) and (glutamic acid). Each of them possesses carboxylic acid in their side chain, giving them their acidic properties (give a proton).

In a solution diluted with water with a physiological pH, all three active groups are ionized in these amino acids, thus giving an equal charge result (-1). In ionized forms, the amino acids here are called aspartate and glutamate. 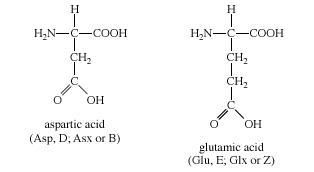 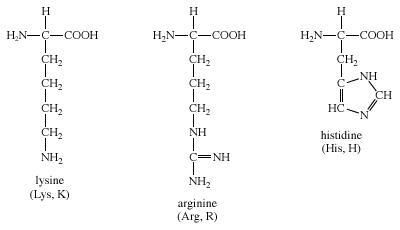 The majority of amino acids are in the second, third and fourth groups (hydrophilic). As a result, they accumulate on the surface of spherical proteins in solutions diluted with water.

Amino acids, through their potent groups (carboxyl, amino, and R groups) can perform a massive number of chemical reactions. However, two reactions (the peptide bond and the cytin oxidation) are particularly important, because of their effect on protein synthesis.

Other roles are played by amino acids:

Amino acids are considered (precursor) for several types of complex molecules containing nitrogen. Most notable are the basic components of Nucleotide and nucleic acids (DNA and RNA). Moreover, cofactors are derived from complex amino acids such as heme and chlorophyll.

Heme is the organic group containing iron and is required to complete the biological process of basic proteins such as the oxygen transporting hemoglobin and the electron transporter cytochrome c. Chlorophyll is a dye required in photosynthesis.

Many amino acids (or their derivatives) act as chemical correspondences. Many essential and non-essential amino acids (metabolic intermediates) are important. Important examples include the amino acids arginine, citrulline and ornithine, all of which are considered to be an element of the urea cycle. Urea synthesis is the main mechanism for the disposal of nitrogenous waste.

Today’s biochemist has a wide variety of methods for separating and analyzing amino acids and proteins. These methods exploit the chemical differences in amino acids, especially in their melting and ionizing behavior.

Some common uses of amino acids :

Amino acids are also used in the treatment for food and drug use. For example, patients are often injected with amino acids to provide them with these nutrients before and after the surgery.

Treatment with one type of amino acid is considered part of the medical procedures to control a specific case of the disease, for example, (L-dihydroxyphenylalanine) or (L-dopa) is used for Parkinson’s disease, glutamine and histidine in stomach ulcers, arginine, citrulline and ornithine in the treatment of Liver diseases.

Amino acids are the origin of life on Earth:

The question of why organisms contain Earth (L-Lamino acids) instead of (D-D amino acids) remains an unsolved mystery. Some scientists have long suggested that a huge portion of the organic compounds that were the ancestors of the amino acids – and perhaps some of the same amino acids – appeared at the beginning of Earth’s formation as a result of a comet or meteorite effect.

One example of meteorites rich in organic matter was on September 28, 1969, in Murchison, in the state of Victoria, in Australia. It is believed that its origin is guilty, because it contains high levels of water up to 12%. Many different types of amino acids are known in the meteorite, some of which are found on the planet Earth. However, some of the components identified are not indicative of a ground source.

what is cooking in chemistry point of view