For many years, man has wondered how matter is formed . Matter, which is a fundamental aspect in the area of chemistry , is composed of small particles which we all know by the name of atoms , which can have specific behavior and properties . Many atomic models have been developed over time, and they are usually named after who created them or who discovered them. All of them vary in theories and characteristics , however, some of them have undergone a series of modifications to be improved through new scientists, physicists, chemists, etc. 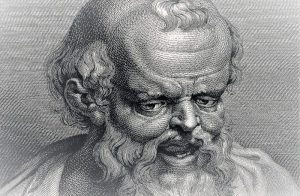 The atomic model of Democritus was the first model postulated by a Greek who said that atoms were homogeneous , eternal and could not be divided, that they were invisible and incomprehensible and that they also had different internal characteristics .

His theory outlined that atoms were homogeneous , eternal , indivisible , invisible and incomprehensible , and that they were characterized by their shapes and sizes . He explained that all matter depended on the atoms that made it up. Together with Leucippus he determined that movement is a real fact and that force and inertia were born from it, which to this day are used in experiments.

It ensured that the atoms were united by their different forms, but that they could be distinguished between them, and that they were divided for a certain period of time, caused by the collision which did not last long because they would soon rejoin with others, forming a new body.

He explained that movement in atoms is a natural process and that they will always be moving in space, changing position , but that they can never be destroyed , and that they maintain their shape forever, to be part of a set of them, always as possible.

It also consisted in the theory that the entire universe is made up of sets of atoms , which collided with each other to shape their bodies and although this may be a matter of chance , in the atomic model of Democritus , there is a need for union between them.

The main characteristics of the atomic model of Democritus are the following:

Postulates of the atomic model of Democritus

Fundamental principles or postulates of the atomic model of Democritus are as follows:

Democritus inherited the following contributions from us that are still valid regarding atoms and matter:

The experiment on which Democritus was based to be able to give a logical explanation of his model, began with a stone , with which he explained that if this stone was cut in half, then two pieces of the same stone could be obtained and if it were repeated The operation over and over again in a continuous way, it would be possible to reach a part within the stone which could no longer be cut, a piece whose main characteristic was that it was indivisible , and what he called the ” atom “ .

As can be seen, the atomic model of Democritus was totally mechanical and only considered the union that could exist between the atoms . However, this model was very important for the time and it took 2,200 years for the next atomic model to emerge that would resonate with the scientific community.

What problems does the atomic model of Democritus present?

The main problem that the theory of this model presented was that it was a purely philosophical theory , not a scientific one.

The importance of the atomic model Democritean has taught us is that some of the properties and features possessed by atoms , electrons , and other particles. Democritus is considered within chemistry , as the father of the atom and despite the fact that his model was considered quite primitive compared to what we know today, it was a very important contribution to what we know today and that we consider correct.

What is ethanoic acid?