These, for people who are unaware of the subject,  could be considered as energetic galaxies , to simplify the fact, each atomic orbital has a varied shape depending on the category it has, and from there is born what would be its energy , each orbital is unique and unmatched , in chemistry these are compared to neurons or cells. 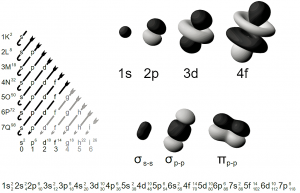 What are atomic orbitals?

An atomic orbital is considered to be the region of a specific defined space that is determined by a particular solution , that is, it has its own unique and singular mathematical sequence , it is totally independent of time.

There are several shapes for atomic orbitals and these go in the following order:

It is totally symmetrical and spherical , thus enveloping the atomic nucleus , it is initially created by an electric cloud that gradually becomes what the sphere would be .

These have a flatter and flattened geometric shape , made up of two semi-spheres that resemble olives and have a collision point or the point of contact, which is the atomic nucleus , they are oriented depending on the coordinate axes.

These orbitals could be said to be more diverse , independent and unique , since their shape has random directions , it is divided into four parts that are oval at one end and pointed at the other, giving it a pyramidal shape , these parts are oriented towards different planes of space respectively, until joined by the energy emitted by each divided part , leaving only two conical figures crossed in the middle by a small ring, which was previously created starting from the other two parts, this ring is recognized as double nodal cone.

These orbitals are even more complex , they have a complex and exotic shape , in addition to this, they have 4 radial nodes.

Among the main characteristics of atomic orbitals are:

In general, each orbital has two electrons , but there is a peculiarity that determines their configuration within an atom and that is that it is the opposite spins that configure its polarity.

Among the atomic orbitals we can find:

How Atomic Orbitals Are Symbolized

The atomic orbitals present a different symbology for each type which are separated according to their shape , these in turn are directly related to the spectral lines , their symbology being the first letter of the word in English.

How many atomic orbitals are possible for a given electronic sublevel

To correctly understand how many atomic orbitals are possible , the best way is to set it in a box as follows:

If the element of the periodic table “neon” is studied , it has a layer full of 2s and 2p orbitals, which would be structured as follows:

To break down the atomic orbital of the third row, a D orbital is entered , this is because there is a covalent bond of the ion , in most cases orbitals of this type are discarded , but here it comes into play due to their similarity layered from their orbitals. By breaking down the one in the third row, the neon will be left with 2s and 1p, this in order to reduce its nuclear charge and increase its electronic energy.

Although the subject is extremely complex for those who do not know them , these orbitals have proven to be highly useful for chemists since they not only fulfill functions within polyelectronic systems , but are also included within polynuclear systems.

In turn, in terms of mathematics specialists, it has greatly facilitated them to explain in a coherent way what is the stationary states of an electron within an electric field with respect to quantum mechanics.