The atomic weight comprises all that dimensionless physical quantity which is understood as the ratio of all the masses that comprise the atoms within an element. 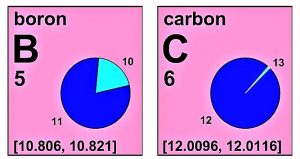 Modern chemistry establishes the atomic weight as the average value of the weight of the isotopes that make up a chemical element . This physical value is dimensionless and is associated with each chemical element present within the periodic table. It is also known as Relative Atomic Mass.

The IUPAC defines it as the ratio of the average mass of the atoms of a chemical element with respect to one twelfth of the mass of a Carbon-12 atom.

How it is calculated

What is atomic weight for

Its usefulness lies in that it allows the quantified measurement of the components and / or substances present within a chemical reaction through their relationship with the molar mass , which is the mass of one mole of said molecule . That is to say, it allows calculating the amount of matter present in a given substance, which is of utmost importance in the study of chemical reactions.

How it differs from atomic mass

The emergence of this concept allowed the successive development of chemistry as a fundamental science and the deepening of technological innovations in this area . By facilitating the calculation of the amount of mass present within a substance through the molar mass, the way was opened for the birth of analytical chemistry, being of vital importance for our modern world.