An oxide is a type of mixture that results from the union of a metallic- type element with a non-metallic- type element with oxygen . Oxides can be found most of the time in liquid, solid or gaseous environments and there are several types of them. The basic oxides , also known by the name of metal oxides are based on this classification, and result from the combination with metals. 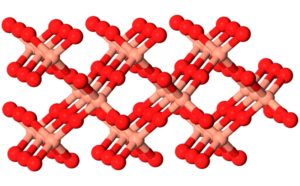 The basic oxides are one type of chemical that occurs when oxygen is achieved bind to a type element metal or, in other words, to a metal through a link -type ion .

The main characteristics of basic oxides are mentioned below:

The structure of the basic oxides will depend on the type of compound that is formed, so they are usually very varied and different, which are generally polymeric .

The type of formula that is used to describe and represent the basic oxides is XO where the letter X represent the metal element while the letter O will represent the molecule of oxygen . In their formulas it is common to find different subscripts, which are presented in the form of numbers.

There are three different types through which the correct nomenclature of basic oxides can be made, these are:

In this case, they are named by first mentioning the word ” oxide of ” and later the name of the metallic element is added . To do this, the following steps must be followed.

In this case, the oxides must be written and named as ” oxide of …”, then the metallic element must be placed and finally, between parentheses , a Roman numeral that will be in charge of indicating the valence with which the metallic element it is interacting with oxygen. In the event that the metallic element only has one valence, then this should not be indicated in the name. For example: nickel (II) oxide.

Its main physical properties are varied and are as follows:

Among its most outstanding chemical properties are the following:

For training, one must remember that the oxides can be formed from the alkali metals which are able to obtain through the heating of the nitrate of the metal. Then, to form basic oxides from alkaline earth metals , their carbonates must be heated and this is done following the equation:

They can also be obtained from oxygen treatment :

Finally, they can also be produced through the oxidation of some types of metals through the following reaction:

Basic oxides are compounds that are used mainly in the industrial field for the production of fertilizers that fight the acidity of the soils. Various types of fertilizers are also manufactured using basic acids and in the medical field they are used to manufacture different types of medications which are used mainly to combat heartburn. They work very well, some of them, as an antidote to poisoning. Magnesium oxide is used as a term conductor and is also used in construction to make walls more resistant to fires.

The risks associated with the use of basic oxides are mainly based on the type of compound that is formed. Many of them have the ability to burn the skin and membranes. When ingested , some can cause a series of symptoms such as diarrhea , nausea , headache , cardiac arrhythmias and can even produce muscle paralysis . In addition, various types of basic oxides are also harmful to the environment and to aquatic organisms .

What is chemical inertia?

Structure of materials: concept and examples