What are the blood donation benefits and risks?

Blood donation benefits and risks are going to discuss here.Thousands of people need daily donations of blood and blood products to keep them healthy and alive.

A person will need a blood transfusion if the amount of blood in the body decreased due to an accident, or if he suffers from a disease that causes the blood’s ability to perform the transport function to be disturbed.

Thus, he will not have enough oxygen and other nutrients to maintain the integrity of his organs necessary for life.

Apheresis – apheresis – is similar to whole blood donation, as it secures various blood components such as platelets and others. Platelet donation may help people with blood clotting disorders.

Apheresis may also contribute to securing antibodies that help treat many diseases, such as the Covid-19 virus.

Donating blood is not only a way to save lives, it also benefits the donor.

Donating blood may help people with many conditions, including:

According to the US Food and Drug Administration, those recovering from the Covid-19 virus can help others fight this virus by donating their blood plasma, which contains antibodies to the disease, and this contributes to increasing the ability of the recipient’s body to eliminate the virus.

A blood donor performs a brief physical examination and a blood test before donating blood. These tests are not completely accurate and do not provide detailed information, but they may help detect some previously undiagnosed diseases, such as anemia or high blood pressure. 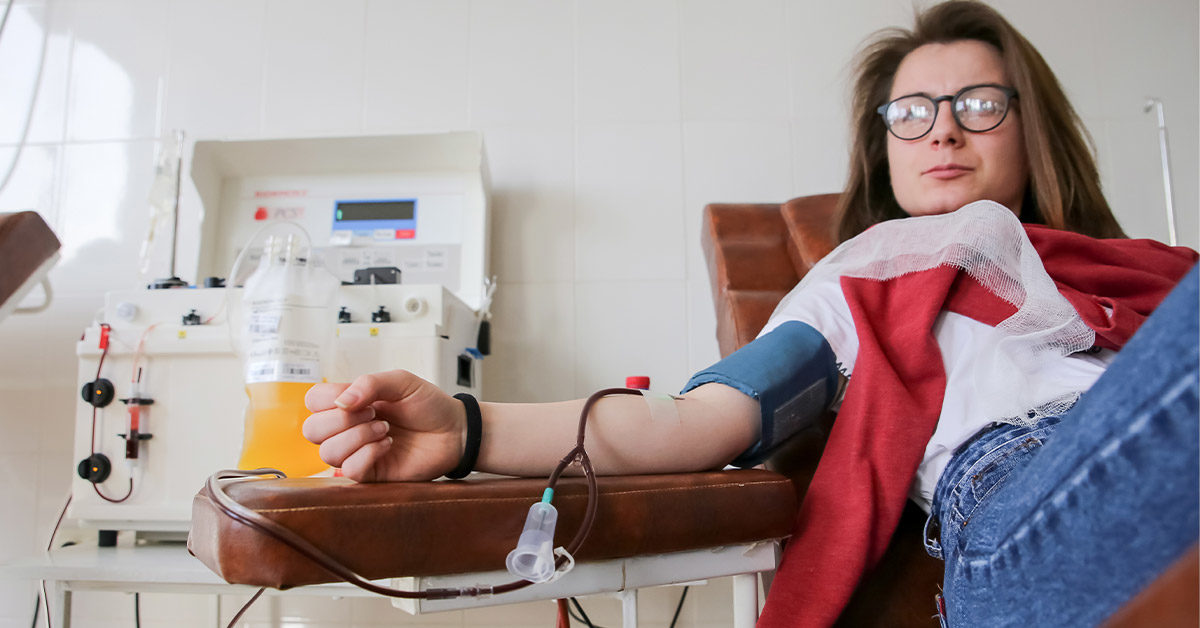 The test includes examination of:

Donating blood is not permitted once a problem is discovered during the test, and finding diseases is the first step in treatment.

According to the American Red Cross, donating one unit of blood may save the lives of three people, and thus the donor provides a very important service to his community, in addition to helping others contributes to the donor’s self-esteem.

It is believed that the blood donation process burns about 650 calories, but there is no scientific study confirming or denying this, in general, any benefit from this burning process will be short-term and will not contribute to weight loss.

But according to a 2012 study, blood donation centers should measure people’s weight before donating blood to identify obese people, help them lose weight, and treat any health problems caused by it.

The body needs iron to produce red blood cells. Almost one million people in the United States suffer from the first type of hereditary hemochromatosis. This disease causes high levels of iron in the blood, in addition to the excess iron deposits in other organs such as the heart and liver, which affects their functions.

According to the Centers for Disease Control and Prevention, people with hemochromatosis may benefit from apheresis similar to donating blood, and may constitute a treatment option for their condition. In many donation organizations, people with this disease are allowed to donate blood, but some do not.

In research conducted in 2019, researchers examined data on nearly 160,000 women who had donated blood over a period of ten years or more, and found that repeated donations over a long period provided protection against cardiovascular disease.

Some researchers say that donating blood may help reduce blood pressure.In 2015, researchers monitored the blood pressure of 292 people who donated blood from one to four times over a year, about half of whom had high blood pressure, and it was noticed that their condition improved with repeated donation.

In addition, the blood pressure test – which is an essential step in the donation process – is an excellent opportunity to detect high blood pressure, measure pressure and record the results, and thus we can work to control the pressure.

In 2007, researchers examined the data of more than a million blood donors, and they noted that the percentage of those who are at risk of death from any cause is about 30% less than non-donors, and that the risk of cancer is also lower by about 4%, and thus they concluded that blood donors have a better health condition than others.

In 2015, the previous data was re-examined again, taking into account other factors, and it was found that the risk of death from any cause decreased by 7.5% with blood donation annually.

The United States of America and other countries have strict regulatory measures in place to ensure safety, as blood banks monitor both the US Food and Drug Administration and the American Federation of Blood Banks.

Safety precautions include the following:

There are some disadvantages that may accompany donating blood, and we will present them as follows:

The donor may suffer some side effects due to the donation process, and although severe effects are rare, temporary reactions are possible and even common, and include:

These symptoms usually disappear within 24 hours. You should drink plenty of fluids and eat a healthy, balanced diet within 48 hours after the donation, in order to help reduce and prevent side effects.

Red meat, spinach, juices, and iron-fortified breakfast chips are important for providing the amount of iron needed by the donor’s body and replacing what has been lost.

In rare cases, the donor may experience more severe symptoms, such as:

These symptoms usually appear in donors who are young, underweight, or for first time donors.

Some studies claim that donating blood negatively affects athletic ability due to its effect on the circulatory and respiratory systems and reducing iron levels, but a report published in 2019 denied there was enough evidence to prove this.

Donating and collecting blood is a meticulously organized process that includes several stages:

The donor must get enough sleep the night before the donation process, and upon his arrival at the donation center, the following steps will be taken:

It checks that the individual is not infected with any disease that may be transmitted to others.

The health care professional will take the following steps while donating blood:

The process of donating a unit of blood takes 6-10 minutes, and the entire procedure takes 45-60 minutes until the end of the donation process.

The health care professional presses the puncture site with a piece of cotton gauze and applies a bandage. The donor has to wait 10-15 minutes before departure, during which he receives some refreshments to regain his energy.

The donor should continue pressing the puncture site and raise his hand for 3-5 minutes if bleeding continues after donation.

Cold compresses may be placed on the puncture site if there is bleeding under the skin, and a period of 24 hours may be applied and then warm compresses are used.

The donor must verify that he has the requirements of the donation process before donating blood or blood elements.

Some factors may affect a person’s ability to donate blood, so the following questions should be asked:

According to the American Red Cross, one person needs a blood transfusion every two seconds, and about 6.8 million people in the United States donate blood annually, yet organizations are concerned about the numbers dropping.

Donating blood is a worthwhile process that contributes to a person’s self-esteem, has low risk levels, and offers many benefits to many individuals.

What does your digit ratio say about you?

fuel made from biomass made economical by a smart concept