Bohr atomic model: Atomic theory has come a long way in the last few thousand years. Beginning in the 5th century BC. C. with the theory of Democritus, advancing towards the atomic model of Dalton in the 18th century, and maturing in the 20th century with the discovery of subatomic particles and quantum theory.

the journey of discovery has been long and winding. But we might think that one of the most outstanding milestones that have occurred in this long way has undoubtedly been the Bohr atomic model, also known as the Rutherford-Bohr atomic model.

Proposed by Danish physicist Niels Bohr in 1913, this model represents the atom as a small nucleus with charge positively surrounded by electrons traveling in orbits circular around the center. 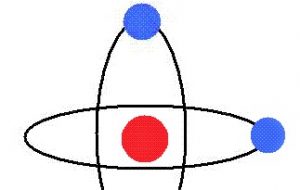 This atomic model is a representation of the atom proposed by Niels Bohr, which states that the electron has the ability to move in orbits at a certain distance around the nucleus of the atom, in a uniform circular motion.

What is Bohr’s atomic model?

It consisted of a theory that told us that each time the electron changed its orbit, it could emit or absorb energy in fixed amounts that were known as “quanta”. Bohr explained in his theory that when an electron moves from one orbit to another and is directed toward the nucleus, there is a loss of energy, and light is emitted, with characteristic wavelength and energy.

Bohr’s atomic model refined some of the elements of Rutherford’s model that were problematic. These include problems arising from classical mechanics, which predicted that electrons would release electromagnetic radiation while orbiting a nucleus.

Due to the loss of energy, the electron should have rapidly spun inward and collapsed in the nucleus. In short, this atomic model implied that all atoms were unstable.

The main characteristics of Bohr’s atomic model were the following:

He was the first to speak of the atom as a nucleus with a positive charge surrounded by electrons orbiting. He found the operation internal of an atom, the electrons are able to orbit independently around the core.

From his interpretation of the atomic model, Bohr was able to structure in detail the periodic table of elements that existed in his time and affirmed that the chemical properties and the binding capacity of an element were related to its valence charge. Bohr’s work on the periodic table developed a new field of chemistry: quantum chemistry.

His experiment consisted of studying the hydrogen atom with a proton and an electron. What he did was analyze the absorption and emission spectra by heating the atom so that it emitted light at the atom. With his experiment, he came to the conclusion that the electron rotated in spherical orbits around the proton.

What problems does the Bohr atomic model present?

Bohr’s atomic model theory had three main problems or major limitations which were as follows:

Thanks to Rutherford it was possible to reach the conclusion of a planetary model of the atom; that is, electrons that were orbiting around a nucleus.

Bohr’s theory, although not considered an exact theory, is very important historically, since it was the first model to include and postulate a quantization, which tells us how electrons can have stable orbits around the nucleus of the atom.

What is methyl salicylate?