Matter can be found in various states of aggregation , among them we can find the solid, gaseous and liquid state, however, there are other types of states that are less well known, one of them is known by the name of Bose-Einstein condensate. , considered by many chemists, scientists and physicists as the fifth state of matter. 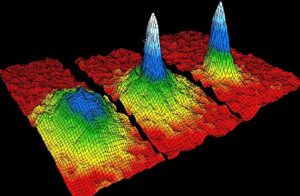 What is Bose-Einstein condensate?

The condensate Bose-Einstein is a type of state of aggregation that may have the matter formed by a series of bosons super cooled reaching the absolute zero and where most of these bosons are in the state quantum lowest that can be achieved.

As mentioned previously, there are not only the three basic states of matter, liquid, solid and gaseous, on the contrary, there is a fourth and a fifth plasma and ionized states . The Bose-Einstein condensate is one of these states and has several features , among which the following are mentioned:

This state of matter was discovered by the physicists Albert Einstein and Satyendra Nath Bose , who previously managed to predict it in 1924. At that time, the theory presented two important difficulties, the first of which was related to the production of low temperatures that were near absolute zero , the second was related to the creation of gas in subatomic particles .

Thanks to two important advances that occurred in 1995, these advances were the following:

In 1920 , Albert Einstein and Satyendra Bose published a shared article that talked about photons of light and their properties . In this article, they described a series of rules that were able to determine whether two photons could be considered identical . They called this the “Bose-Einstein condensate . ” However, its existence could not be fully proven until a few years ago when a sample could be cooled to extremely low temperatures and with it, they were able to compare the equations.

In 1995 , Erick Cornell, Carlo Wieman and Wolfgang Ketterle managed to use several experimental techniques related to atomic physics and with this, they reached a temperature of 0 .00000002 degrees Kelvin exceeding absolute zero.

Bose-Einstein condensate is very similar to laser light and for this reason, they have the property of being able to behave in a uniform way . Its low-energy atoms can fuse together to form a mass that is characterized by being dense . Furthermore, because the velocity of the particles is very low, the interaction between them is also very weak .

This new state of matter has several applications, some of them are mentioned below:

The importance of this condensate is based mainly on the fact that it makes it possible for its applications to be used in the field of quantum computing , in obtaining lasers that work by means of an atomic pulse and in the replacement of the photons that the cells possess. current lasers by atomic beams that turn out to be more uniform.

Some examples where the Boise-Einstein condensate has been put into practice are the following:

Currently, the Boise-Einstein condensate is under constant study . Many current scientists are focused on finding ways to use systems for processing quantum information . Many groups are working on obtaining different ways to start working with it, and to achieve separate atoms in some way, and then manipulate them to do simple quantum computing operations .