The calcium phosphate is one of the most important material which can be found in the field of biology , industry , medicine and dentistry . The way it is composed, all the functions it can fulfill and the uses that can be given to it at any given time make it vital in many aspects. Its important properties have been studied over time to better understand them, and to know in which areas it can be used. 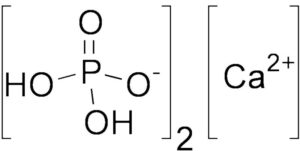 What is calcium phosphate?

Calcium phosphate or phosphoric acid is a type of calcium salt that is characterized by being white in color , has no smell or taste and also has a very low level of solubility when in contact with water.

Calcium phosphate is a combination of two substances or elements, salt and phosphorus , and is part of the group of minerals known as containing calcium ions or orthophosphates . It is common to find them in different types of food , however, it can also be found in medicines and formulas . Among its main characteristics we can mention the following:

Most calcium phosphates have a type of amorphous structure. It contains calcium and phosphate (FCA). It has the following molecular structure:

The chemical formula of calcium phosphate is as follows: Ca3 (PO4) 2

Following the rules used to name the different combinations that occur between elements and compounds, the nomenclature of calcium phosphate is as follows:

Among the physical properties of calcium phosphate, the following are mentioned:

The main chemical properties of calcium phosphate are mentioned below:

Calcium phosphate is found in many types of foods that are consumed daily, such as milk and cheeses. It is manufactured in laboratories to be used in medicines and it is also added as a nutritional supplement .

Calcium phosphate is widely used to help maintain good dental health by providing greater hardness and strength to the bones located in the mouth, it also intervenes in a positive way in the rest of the bone system , helping to reduce the chances or delay the appearance of some diseases such as osteoporosis . It is also widely used by athletes as it has the ability to help control muscle contraction and increase performance .

It can be used to treat depression , reduce the number of headaches , improve mood in people who have gone through difficult situations, and help to fall asleep in cases of insomnia. Nutritionists also use calcium phosphate as it helps patients lose weight , which also treats secondary diseases such as high blood pressure and high levels of cholesterol in the blood.

The food industry uses calcium phosphate by adding it to already processed foods, which helps regulate the level of acidity and help improve the quality of nutrients in foods, mainly dairy products. It is a mineral that can be used in the creation of breads as it improves the baking process and the results.

In dentistry , calcium phosphate is used to perform dental cleanings as it is considered a powerful whitener, due to a series of abrasive properties that it has. It is also added to the components that are part of toothpastes and is sometimes used as a preventive means to maintain healthy teeth and gums.

Calcium phosphate, although it is a mineral that can be beneficial to health, when consumed in excess it can represent a great risk for it. When taken in excess, a condition known as renal osteodystrophy can occur , a condition that causes bone metabolism to become very slow. It can also cause stomach problems , nausea, vomiting and a considerable reduction in appetite.

This mineral, taken in excess and without medical control can also cause hypercalcemia , formation of stones in the kidneys, cardiovascular problems mainly in women and complications in the kidneys, so it should not be taken by people who have any type of disease related to this body organ.

What is a molecule?