The carbonyl group , in organic chemistry, is a divalent chemical unit consisting of a carbon atom (C) and an oxygen atom (O) which are connected by a double bond . The group is a constituent of carboxylic acids, esters, anhydrides, acyl halides, amides, and quinones, and is the characteristic functional group of aldehydes and ketones . Carboxylic acids and all of their derivatives, aldehydes, ketones, and quinones are also collectively known as carbonyl compounds . It is a functional group formed then of a carbon atomwhich has a double bond and an oxygen atom. The word carbonyl is sometimes referred to as carbon monoxide . 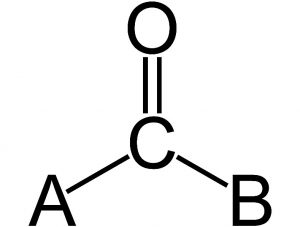 What is the carbonyl group?

In organic chemistry the carbonyl group is a functional group that is made up of a carbon atom that has a double bond to an oxygen atom. It can also refer to carbon monoxide .

Characteristics of the carbonyl group

The most important characteristics of the carbonyl group are the following:

Structure of the carbonyl group

In the structure of the carbonyl group, carbon is linked to three other atoms by means of bonds which either use sp2 orbitals or are kept in a plane that separates them from each other at an angle of 120º.  The remaining p orbital of carbon and oxygen is attached through a double bond. The immediate part of the molecule that surrounds the carbonyl carbon is flat ; the oxygen , the carbonyl and the two atoms bonded directly thereto are in a plane.

The electrons that have the carbonyl double bond are held together with two atoms of different electronegativity so that they cannot be shared in the same way. The cloud especially is very mobile and is strongly attracted to the atom that is more electronegative, which in this case is oxygen .

Many spectroscopic studies that have been carried out on carbonyl groups in addition to electron diffraction studies on aldehydes and ketones indicate that oxygen, carbonyl carbon and the other two atoms are all in the same plane. The three different angles of the bond are close to 120 °.

What is the formal charge?