The cobalt is one of the chemical elements found in the periodic table , its name derives from the German Kobalt , which was later translated into French as cobalt , what its name must; It is one of the metals most used today, as it has several extremely useful functions for the development of different activities that are carried out on a daily basis. 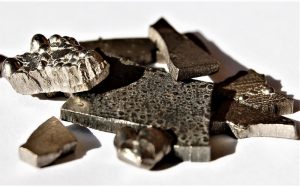 Cobalt is one of the most common chemical elements in the earth’s crust , it occurs naturally and when observed it can appear sparkling; in the same way, it is common to find it in small parts of the environment, as well as in animals. Likewise, it is a key element for human health.

Cobalt varies in colors according to the environmental states in which it is found since it enters the classification of metals in the periodic table, even before the name by which it is now recognized was placed, it was used since ancient times to perform artistic works, painting ceramics, sculptures, enamels and some glass, since its grayish, red and bluish colors were extremely striking.

In recent years, a prototype of an implant for the hip has been developed with this chemical element, to give more firmness to the prosthesis, however, in people to whom this prototype has been transplanted, they have had a great diversity of consequences and alterations , since the pieces have deteriorated and have broken inside the anatomy, causing severe poisoning, in addition to this it is presumed that these implants spread small cobalt particles in the system due to the friction that occurs when walking .

This chemical element was discovered by George Brandt in 1737.

Some characteristics of cobalt are the following:

An explanatory table will be presented below, indicating all the properties that cobalt contains as a chemical element:

Cobalt, like many other chemical elements has various functions, with it the following things can be done:

Where is cobalt found

It can be found most of all in meteorites and stars , however, the sea is also an option to search for this chemical element.

Cobalt has great relevance today, since it helps the optimal development of industry and medicine at the same time, on the one hand being a useful chemical element to facilitate some manufacturing and on the other, being continuously investigated to recognize qualities in this Metal previously unseen , in addition to all this, cobalt is necessary for the health of plants, animals and humans, although in small quantities, however, that does not mean that it is essential for an effective continuous development.