The main objective of atmospheric chemistry is to understand in a quantitative way how the different concentrations of the species depend on the control processes among which we have emissions , transport , chemistry and deposition . This dependency is expressed mathematically by means of the continuity equation , which is responsible for providing the necessary basis for all research models of chemistry with respect to the atmosphere. 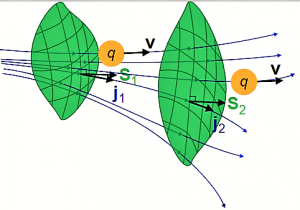 What is the continuity equation?

The continuity equation is the relationship that exists between the area and the speed that a fluid has in a given place and that tells us that the flow of a fluid is constant throughout a hydraulic circuit .

Explanation of the continuity equation

The continuity equation is an equation that explains that the amount of fluid that enters through a tube and that is generally measured in liters / second is the same as the amount of flow that leaves the same tube, regardless if it had, it has more or less radius along it.

When the tube through which the water passes is in the proper conditions, which means that it does not have holes, the amount of water that enters per second as there are no losses must be the same amount as the water that leaves per second. It must then be assumed that when the inlet of the tube is smaller, the speed of the water must also be less than when the diameter or the outlet section is larger. In this case, the inlet velocity of the water will be greater than the outlet velocity.

At present, the continuity equation is widely used to perform different analyzes of nozzles , pipes , the height of turbine blades and compressors . The equation of everyday life or mass conversation is a very useful tool to achieve the analysis of fluids that flow through tubes or ducts which have a variable diameter.

Before explaining the continuity of the equation applied to fluid mechanics, it is also important to know that the continuity equation starts from the following ideal bases :

The continuity equation is as follows:

In the equation of continuity it is also important to know who is known for spending metric or flow , quantity A. v, in other words, we can say that the constant flow is along the tube. The flow is expressed in m3 / s and indicates the volume of liquid that flows per unit of time. Thus, if the flow rate is 1m3 / s it means that in every second 1m3 flows through each area section.

Regarding electromagnetic theory, the continuity equation is given from two Maxwell equations and establishes that the divergence of the current density is equal to the negative of the derivative of the charge density with respect to time , this means that current flow only occurs when the load varies over time.

A very easy example to observe with respect to the phenomenon of continuity can be observed when someone irrigates a little water using a hose , since there it can be seen how when pressing the outlet of the hose we can observe how the water jet comes out more triggered, this is where we check this concept.

When a faucet is opened little by little , a small jet of water is formed, the radius of which will decrease with distance from the faucet and which eventually breaks into drops.