In the field of chemistry, it is possible to find several types of chemical compounds such as oxides which are basically composed of an oxygen atom and one of some other elements such as copper oxide. They can be found in liquid, solid, and gaseous states and there are also several types of oxides. 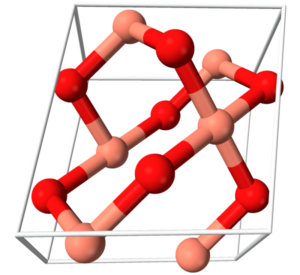 What is copper oxide?

it is a type of chemical compound regarded as a basic oxide that has the ability to be dissolved in various kinds of mineral acids thereby forming various copper salts.

Among the most representative characteristics that can be found in copper oxide, the following are mentioned:

It has a type of ionic structure so it has electrostatic attractive forces between its ions. The graphic interpretation of its structure is shown below: 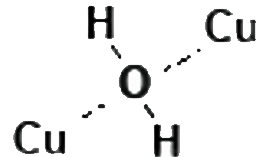 The formula of copper oxide

Its basic formula is Cu2O.

Regarding the nomenclature of copper oxide, this can be done in three different ways:

Its most important physical properties are detailed below:

Among its chemical properties are the following:

In the case of copper oxide I, it can be obtained from the mineral known as cuprite which is found in reddish rocks, in addition, it can be formed in pieces of copper that have been plated in silver and then are exposed to moisture to cause a type of corrosion. As for copper (II) oxide, it can be obtained in four different ways, which are:

As mentioned previously, there are two types of it. In the case of copper oxide I, it can be used as a type of pigment with which red, gray, black, and green enamels can be made. It is also one of the main components in the production of hydroxide cuprammonium which is used to manufacture rayon.

It is also used in the field of science as a type of nutritional supplement for animals that are copper deficient. It is a powerful fungicide and is a good semiconductor.

In the field of agriculture can be used for foliage as a moisturizer. In addition, it is part of the ingredients that are used in the creation of agricultural pesticides.

The copper oxide type II is mainly used for the alloy copper, to produce glazes, and as a means for removing different types of hazardous materials such as cyanide. In the field of agriculture, it is also used as a type of fungicide.

Interesting use of copper oxide occurs in ships as it is used as a type of antifouling agent to prevent the possible formation of barnacles and other types of marine organisms that can cling to the bottom of ships and cause problems. serious in their structure. It is also used as a preservative for wood, roofs, tiles, and walls found on the seashore or cliffs.

Copper oxides tend to be dangerous and potentially toxic, especially in the case of copper II oxide, which can even cause serious problems in the central nervous system and in the endocrine system.

They are very irritating to the mucous membranes such as the eyes and nose and can also cause serious damage to the epithelial tissue.

If ingested, it can produce significant depression in the nerves, cause serious gastrointestinal problems, damage to the liver, kidneys, and vascular system. and even the circulatory system.

When inhaled, the lungs are severely damaged and can lead to a medical condition known as ” metal fume fever ” which produces a series of flu-like symptoms.

Dermatitis is another common problem that occurs when people are exposed to this type of oxide. When exposure is prolonged and continuous, the appearance of Wilson’s disease can be generated.

For these reasons, the use and handling of this oxide must be done under strict security measures, in environments that are not completely closed and, on the contrary, have good ventilation.

Reverse osmosis: how it works, what it is for, examples

What is hydrochloric acid?

Uses of Laboratory Thermometers and their Functions in Chemistry Lab

What is Chloric Acid?

What are the Hume-Rothery rules?