In the field of chemistry and physics it is important to remember that all matter has mass and that in addition, they can be in different states depending on the temperature and pressure they face. One of these ways in which matter can be found is the crystalline structure , an orderly way and with repeating patterns in which an atom , a molecule or an ion can be found . 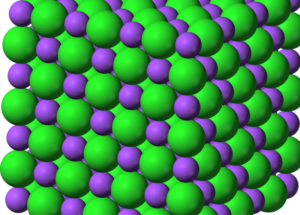 The crystalline structure is a type of solid state in which atoms, molecules or ions can be found, which is mainly characterized by having a high spatial order . It is the corpuscular type architecture that can be observed in bright bodies .

A crystal structure is any structure in ions , molecules or atoms having the capacity to hold together following a provision of such dimensional ordered . This type of structure can also be considered as the highest level in terms of the order that a certain material can have. Furthermore, the crystalline structure is a unique and specific characteristic for a material , in other words, there cannot be a compound that is organized in the same way as another.

It is considered as a type of identification marker for compounds. In this case, the particles are not alone but rather are always interacting with others and therefore constantly consume energy.

Once the metals have solidified from a molten state , they manage to order themselves in a very peculiar way that is known as a spatial network , a very orderly way in which the particles can be found creating a series of regular, repetitive and also periodic arrangements forming three-dimensional structures .

Metals can become crystallized by acquiring three different types of structures. The first one is centered cubic body , the second hexagonal closed and the last, the closed cube . In all of them, the number of metal atoms will always be quite high.

The nonmetals are elements found in the upper right of the periodic table and their properties and behavior are very different from those of metals. The structures of non-metals are very different from those of metals. Metals crystallize into tightly packed assemblages that contain no molecules or covalent bonds . The structures of nonmetals have covalent bonds and many of them are made up of individual molecules . the electrons of nonmetals are located in covalent bonds, while in a metal there is a delocalization of electrons throughout the solid.

Depending on the function that exists in crystalline systems and the chemical nature of their particles, crystalline structures can be classified as follows:

They help to indicate the different lengths of the links and the network parameter that a specific material has. This arrangement is of utmost importance in order to also understand strength and ductility . In addition to ductility, the crystal structure also determines the strength of a material. Crystalline structures composed of point defects have greater strength and hardness compared to pure metals.

Titanium has a type of compact hexagonal crystal structure known as alpha. It can be transformed into a cubic type structure that is located in the center of the body, which is known as beta.

At room temperature the crystal structure is face-centered-cubic with a base of one nitrogen atom.

The type of crystalline structure that can be observed in mercury is the rhombohedral type .

The Beryllium is one of the lightest metals and atoms interact with each other to form a structure crystalline hexagonal type where beryllium atoms have six neighbors side and three on the top and bottom.

What are acid and base theories?