In the field of chemistry there are a large number of important chemical processes which are chemical or physical operations that have the ability to transform the initial substances into products that turn out to be completely different. One of these chemical processes is known as crystallization, a process or technique through which solid compounds can be purified. 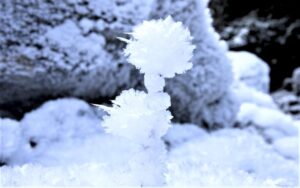 The crystallization is a process by which one can make the dissolution of a solid considered impure in the least amount possible to obtain through the use of the solvent correct and high temperatures to achieve obtain a solution saturated when it cools produces crystallization.

Crystallization is a chemical process that consists of the transformation of a gas , a liquid or some type of solution , into a group of crystals that have a solid consistency, a simpler definition would be a chemical process of solidification from a gas. It is a technique that is based on the separation of solutions when conditions can be adjusted in such a way that only one of the solutes can crystallize, while the other remains in solution.

What is crystallization for?

Crystallization is a process that has the ability to separate the solid components to form a homogeneous mixture and for this reason it serves as a purification method . By means of crystallization, it is then possible to obtain products having a purity percentage of up to 99%. It also helps you create uniform crystals that are easier to pack, handle and store. It notably improves the product to be crystallized for better commercialization .

On the other hand, secondary nucleation is responsible for designating the crystal formation process in the new phase, which will be conditioned by the presence of particles that belong to the same phase within the system that is supersaturated.

With several applications in which crystallization can be used, among them we mention:

An example of an experiment can be carried out on sugar crystals . To do this, you will need a piece of string, 3 cups of white sugar, 1 cup of boiling water, a glass jar, a small stick, and food coloring.

First, the jar must be filled with the previously boiled water and the vegetable coloring is added to it, later, the sugar will be added little by little until it dissolves completely. The rope must be tied to the pencil and the sugar is gently rubbed on the rope, and then the stick is placed in the mouth of the jar, so that the rope can hang in the water that is sugary.

It is important to prevent the cord from touching the bottom of the jar. The jar is then placed in a warm place and left in place for at least a week. After this time has elapsed, it will be possible to observe the sugar crystals forming on the rope.

Some examples of crystallization are as follows: