The einstenio also known as atenio element is a synthetic that are within the periodic table with symbol is and atomic number of 99 . This name was given in honor of Albert Einstein, although it was discovered in December 1952, in the remains of the first thermonuclear explosion that occurred in the Pacific, carried out a month earlier, by the team of researchers formed by GR Choppin, A. Ghiorso, BG Harvey and SG Thompson. 2 3 4. Like many of the elements of this same group, we cannot find it freely in nature, but are obtained artificially.. In addition, its life time is less. In order to obtain this element, a nuclear transmutation must be carried out from elements lighter than it. This transmutation turns the stable nuclei into different ones. 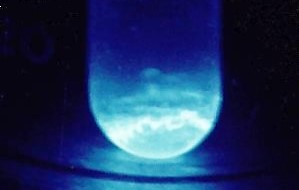 Element number 99 of the periodic table, whose atomic weight is 252, its symbol Es and is within the series of actinides . It is obtained artificially and most of its structure is synthetic , so its concentrations in the common environment are very low and difficult to find.

Einsteinium was discovered among the chemical remains of a thermonuclear explosion in the Pacific Ocean , which occurred in 1952; The researchers conducting such research were scientists GR Choppin, A. Ghiorso, BG Harvey, and SG Thompson. In this test known as Ivy Mike , which was carried out in November 1952, a 10-megaton bomb was detonated in the South Pacific and after an exhaustive analysis of the remains of the explosion, the team led by Ghiorso, then discovered the isotope of einsteinium 253Es. They were in charge of isolating this element and named it in honor of Einstein, turning out to be the seventh transuranic element. However, this discovery was kept secret until 1995 by opinion of the US government, due to the massive tensions that existed caused by the Cold War .

Physical and chemical properties of einsteinium

Basically, this element called einsteinium is then a synthetic element and actinide , the actinides that have a greater number in their atoms are not found in nature and their life time is much shorter, their chemical properties are those typical of all heavy trivalent and it is the first divalent metal in the actinide series with two bonding electrons instead of three. It is considered a metal that is highly radioactive, characterized by its silvery-gray color with whitish tones, and has complex self-irradiating properties . Its state in natural form is solid, its appearance is unknown and its atomic number is 99. The atomic mass determined by the total of neutrons and protons is present in a single atom within the element. It is located in period 7 of the periodic table. The electron configuration of einsteinium is [Rn] 5f11 7s2 . To obtain einsteinium, approximately 1 kg of Pu-239 must be irradiated in a reactor to generate Pu-242. This Pu-242 is then introduced into plutonium oxide ballsand powdered aluminum. Subsequently, all these balls are placed on different rods and are irradiated. Finally, the rods are introduced into a high flow isotopic reactor. After all this, the einsteinium is separated from the californium into rods. Einsteinium has not been found in nature or throughout the earth’s crust , so there is no reason to consider its effects or repercussions on human health .

Uses and applications of einsteinium

It has no commercial importance and only a few of its compounds are known, it has a half- life of about 20 days (for this reason it would not be worth making a product or material with this element), and since only small amounts of einsteinium have been produced, it currently has no use outside of basic scientific research. The isotope 253Es is used to produce the element known as mendelevium . In particular, einsteinium was used to synthesize first 17 atoms mendelevio new element in 1955. Its uses for these reasons are limited to purposes and goals of research only.

What is the Aufbau principle?