Although we do not usually realize the world that surrounds the human being is made up of natural, physical and chemical elements . Among the natural elements that we observe in daily life can be ants or small bushes that we find in parks and gardens. When we talk about the physical elements that are within daily life, we speak not only of those that we can touch but also their laws, such as those of gravity, which we see when any object falls to the ground. However, it is the chemical part of life that we do not usually see in such a “ simple way”Since although we can see it in the kitchen with oil and vinegar there are other elements that compose it and we cannot see them as solutes or esters. 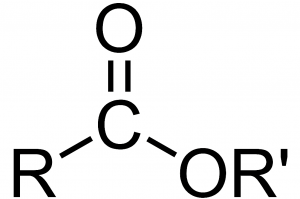 The esters within chemistry comprise a complex family of organic-type compounds , which are mainly used within different drugs , in the area of ​​household products, naturally in fruits and by interventions within the areas of chemistry . These are mostly found naturally, especially in different plants , and when combined with other compounds of volatile particularity, it ends up producing various fruit aromas., that is why it includes within the industry of household products. Within chemistry it is rare that a single element plays a fundamental role, however, esters are rare.

Within chemistry, esters are organic compounds where the alkyl group that forms it at first is symbolized by an “R” , it changes its structure to one or more hydrogen atoms of any oxygenated acid.

On the other hand , an oxacid is called that inorganic acid to which the molecules that make it up contain a hydroxyl group presented as “OH -1 “ where the hydrogen which is the “H” can dissolve to a hydrogen ion.

Within the organic family of esters we find its 4 main types:

With respect to its properties we find two main branches

In it, the esters are forced to break their chains of bonds in a simple way, usually between oxygen and alcohol. In turn, different reactions occur such as saponification, which is used to produce its reaction with water using a basic medium.

In it, the esters give life to what refers to odors and some fruit flavors, in turn they play a fundamental role in the production of waxes produced both in a vegetable and animal way, for example: the one produced the bees.

The formula to obtain an Ester is from a chemical reaction of an acid with an alcohol. This reaction ends up taking place thanks to the loss of water,  for its part it is established that the water is made up of OH which is the necessary acid base and the alcohol ” H ” necessary for its total conformation is added.

The esters are derived from carboxylic acids as well as the alcohol from which it comes. That is why in methyl ethanoate , which is usually called acetate, its name can be established in two parts: The first would come from its name which is already known ( acetate ) which is an acid. ethanoic, followed by methyl, which arises from methyl alcohol. This being its most basic form.

How esters are formed

There are many ways to create esters and every day more techniques are developed to synthesize them. In the same way everything continues to start from the same base and that is that it must start from a compound which has a carbonyl group (it is defined as a carboxylic acid) and this must be taken to a structure similar to a triangle formed by bonds of CO-O.

Among the most used methods is the formation from sodium chlorides where it is synthesized from acyl chlorides, (RCOCI) unlike the previous method this changes to the OH group that is to say to the Hydroxyl by the Ci atom of its structure.

When talking about hydrolysis in esters, it refers to the peculiarity that it has of reacting with water, (It is known as a hydrolysis reaction) that is why it is used in aromatic aerosols. However, this does not achieve it by itself since it depends on an environment that is acidic or basic enough in which it can activate said chemical reaction.

When activating through an acid medium is sought, this is responsible for abruptly separating the elements that compose it, while when a basic medium is used, saponification is used, which is a process that is often seen a lot in the elaboration of handmade soaps.

Esters are found in the middle of nature from the morphological composition of soils to the very life of nature . The easiest way to perceive it is when you take any fresh route and immediately perceive a pleasant smell, this is produced thanks to the action of the ester together with other components.

In turn, within our body there are also different esters that are produced through triglycerides that occur in the form of fats in any of their types.

The esters have different functions within many of the products that are used or taken at some time in life. Some of them are:

Among the easiest examples in which we can show esters are:

Esters are one of the products that come directly from nature and act in a perfect way, but thanks to the hand of man, it ends up having more varied uses with which it supports the daily life of human beings in various ways . For example, its application within the pharmaceutical area where it helps humans are their various diseases.

Alkyl radicals: how they are formed, nomenclature, examples

What is activation energy?

What is sodium hypochlorite?