In the field of chemistry there are several types of important chemical compounds , one of these compounds is known by the name of oxide , which can be found in the three different states of aggregation that matter has. The oxide is one that is composed of an atom of a certain element and at least one oxygen atom . The ethylene oxide is an example of these oxides. 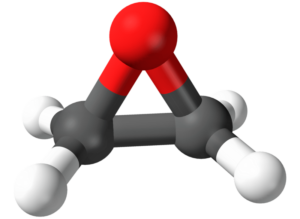 What is ethylene oxide?

The ethylene oxide , ETO or oxirane as it is also known, is a type of gas flammable and colorless which is derived from the oil and which is primarily used to create different types of substances chemical.

Oxide ethylene was prepared for the first time in the year 1859 by French chemist Charles-Adolphe Wurtz , who managed to get it by treating 2-chloroethanol with a base. It was a product of great industrial importance during World War I as a precursor to the refrigerant ethylene glycol and the chemical weapon known as mustard gas . Among its most outstanding features are the following:

The structure of ethylene oxide is in the form of a ring with three members . It is a structure type triangular and form bond angles of 60 ° so that it is considered that these bonds are weak. Its structure is shown below: 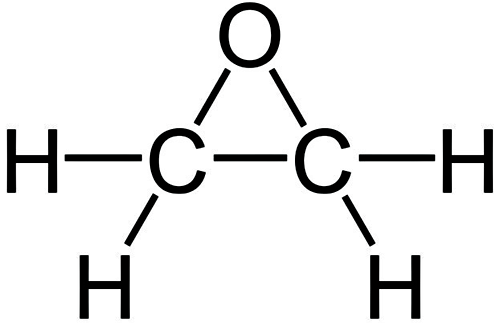 Its chemical formula is the following: C2H4O .

Regarding its nomenclature, the name given by the IUPAC is Oxirano .

Regarding its chemical characteristics, ethylene oxide has the property of having a fairly high reaction power, especially when it is mixed with alkalis and acids , when this happens, it acquires an enormous explosion power since it has the ability to create a type of exothermic reaction . When it is in its liquid state , it can polymerize very easily, and in this process, it gives off large amounts of heat, which increases its risk of explosion as well.

Ethylene oxide is manufactured in large industries capable of its production. At present, the process used to obtain ethylene oxide is carried out by directly oxidizing ethylene by means of a stream of oxygen and silver catalysts . The oxygen used in the process must be obtained in a plant dedicated to the fractionation of air. In addition, the catalyst must have at least 15% of its weight in silver , which is placed on an inert and porous alumina support.

The type of reaction used to obtain this oxide is exothermic with an enthalpy and with the reoxidation of ethylene oxide to carbon dioxide and water . Normally, chemical modifiers are also included during the production process, such as chlorine. The pressures used for the reaction are of the order of 1-2 MPa and the chemical equation used to create this reaction is:

The aforementioned reaction is carried out by means of an intermediate product, in this case oxametalacyclic , which also gives rise to two possible reaction routes:

In addition, it can be produced in chemical laboratories thanks to the action of an alkaline hydroxide (OH-) on ethylene chlorohydrin following the formula mentioned below:

The main use of ethylene oxide is as an intermediate in the production of various types of chemical products , such as anticoagulant products , for various industrial applications and for the creation of daily consumer products, such as household cleaners , personal care items, and fabrics and textiles . A very small amount of this oxide is also used for fumigation and sterilization .

Its derivatives are of great importance within the field of industry, for example, ethylene glycol, a product that can later be transformed into polyester fibers which are used to make upholstery and carpet products. This product is also used to function as a coolant , for fiberglass production, and as an antifreeze in vehicles.

The gas ethylene oxide has the ability to remove bacteria , the mold and fungi . That is why it can be used to sterilize substances that would be damaged by techniques such as pasteurization, which are based on heat. It is widely used in small quantities to sterilize medical supplies such as bandages, sutures, and surgical instruments. In addition, it is very functional to be able to obtain acetic esters which are then used as a monomers of vinyl plastics .

In addition to the great advantages it offers to the field of industry , ethylene oxide also has other advantages which are linked to the sterilization processes , these are mentioned below.

Ethylene oxide is considered an environmental pollutant and also a dangerous toxic to human beings. In fact, several studies have shown that it has the ability to increase the risk of various types of cancer , mainly when exposure to oxide is chronic. In places where this type of material is worked, the equipment and safety suit is necessary and a series of regulations have also been established to control its emissions into the atmosphere .

When inhaled , it can cause serious damage to the respiratory system . It is an important depressant of the central nervous system and when inhaled it can cause infections and in severe cases pulmonary edema . Dizziness , vomiting , headaches and different types of nervous disorders can occur after exposure. When in contact with the skin it can cause skin irritations and if the exposure is severe, burns with tissue necrosis can occur .

It is a product that can cause significant irritation to the eyes and can even cause burns to these organs, pain and blurred vision are common symptoms. If the product is ingested , it can be absorbed very quickly, causing damage to the kidneys and liver .

What is a parallax error? Examples and Meaning in Chemistry