The ethylene is the product organic chemist important that exists for the industry and is for this reason that tonnage is manufactured. Is the basic component of a wide range of products chemicals , from plastics to antifreeze solutions and solvents. Ethylene is a small gaseous hydrocarbon that is produced naturally, but can also be produced or obtained as a result of combustion . 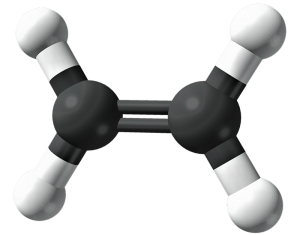 Ethylene is a hormone produced by plants that differs from the rest because it is a gas . It occurs when the fruits reach the maturity after shedding in the air and environment , disappearing so naturally in the air.

Some fruits are capable of producing it when they begin the ripening stage . Apples and pears are examples of fruits that produce ethylene upon ripening. Ethylene is responsible for changes in texture , softening , color, and other processes involved in ripening .

The main characteristics of ethylene are the following:

Ethylene is a compound that was already known from very ancient times and they also knew about its properties for growth. In ancient Egypt , it was the first place where figs were treated with gas to accelerate their growth and in ancient China they used to burn incense to increase the growth of pears .

In 1901, the Russian Dimitry Neljubow demonstrated that the active component that produced ripening effects was ethylene. Years later in 1917, Doubt discovered that ethylene stimulated abscission . But it was in 1934 that R. Game reported that some fruit ripening synthesize the ethylene . In 1935, Crocker proposed that ethylene was the hormone of plant responsible for the ripening of the fruits and inhibition of vegetative tissues that caused the falling leaves.

The main properties of ethylene are:

The chemical formula of ethylene is CH2: CH2 . The ethylene molecule is flat and is made up of four CH single bonds and one C = C double bond , which prevents it from rotating except at high temperatures.

Regarding the structure of ethylene, its molecule does not have the ability to rotate around the double bond and all the atoms are located in the same plane . The angle between the two carbon-hydrogen bonds is 117 °, very close to the 120 ° corresponding to sp2 hybridization .

What is ethylene for?

Ethylene has many uses, generally in solvents , plasticizers , antifreezes, and coatings . Depending on the compound that is made, this will be its use, then we have for example:

As a laboratory- made gas , ethylene can be truly dangerous and can cause irritation of the nose, throat and respiratory tract, central nervous system effects such as headaches, nausea and vomiting. At high exposures , drowsiness, headache, weakness, irregular gait and loss of consciousness. It can also cause nausea, stomach spasms, lightheadedness, temporary unconsciousness, and repetitive attacks.

Other symptoms are dry, red, itchy skin (dermatitis) and burns can result from residue on gloves, clothing or footwear.

We can usually find it in a gaseous state , with a characteristic, non-unpleasant aroma . It can be considered as one of the most important chemical compounds for the industry. Ethylene is generally found naturally in plants , and is considered a hormone within the plant world. This hormone’s function is to participate in the stress processes that plants are subjected to , such as fruit ripening .

How is ethylene obtained?

Most of the world’s ethylene production is obtained through a process known as steam cracking , which in Spanish refers to a cracking with the presence of steam , in typical substances from refineries such as diesel oil, propane , or ethane among others. It can also be obtained from gasoline and its chemical refining process , starting from natural gas . On a small scale, in laboratories , it is also possible to obtain it, when the oxidation of alcohols occurs .

Apart from all the uses that can be obtained from it through the aforementioned chemical processes , it is important to mention its positive points in the ripening of fruits , however, it is also important to be aware of it, especially if it is talking about fruits. of export , as an excess of ethylene produce the fruits deteriorate faster.

What is the metallic character?

What is a nonpolar covalent bond?

What are the inner electrons?

What is tartaric acid?

What is the rate constant?