Many of the white or transparent colored alcoholic beverages that humans consume are produced through a process called distillation. Drinks such as Vodka and Tequila are produced thanks to the distillation of alcohols together with elements such as potato starch in the case of Vodka and the stalk of the blue agave. Within the family of distillations there are several types, some more relevant than the other. For example fractional distillation is used on a large scale within the area of ​​petroleum engineering, in order to reduce much of the oil treaty process. 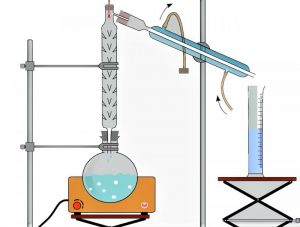 The fractional distillation is a process which is part of the different types of distillations, which is part of the principles of physics but is used in chemistry to separate different liquid mixtures which usually are a homogeneous consistency. That is, it is used when the user needs to separate a liquid solution, making use of the states of matter, managing to bring one of the two liquids that make up its mixture to a boiling point, managing to evaporate and separate it.

This is a process in which two different mixtures are united for various purposes, such as eliminating certain elements from one of the mixtures , managing to assemble a mixture in unison, but above all, eliminating existing residues within the main mixture.

This method is not something very new because it has been used since the first civilizations, although in a more rudimentary way. Although at first its uses were not fully known, with the passage of time it was adapting to the various needs of human beings.

What is fractional distillation for?

This system is used mostly in industries, not only with simple two-liquid ones, which are generally alcohol or water together with other elements such as various fermentations or also compounds such as liquid nitrogen; its not that it works for very complex mixtures such as the organic parts in the tar that is found within the raw oil.

All this process is achieved thanks to an element within its distillation structure called the bubble tower , in which the plates that compose it are horizontally located, which are separated by a few centimeters and it is they who play a fundamental role within of process.

Among the most outstanding characteristics of this distillation system we find:

The distillation process occurs within fractional distillation towers, this being a fairly simple process. In the first instance, the liquids are placed in the glass ball to be heated , after this an effect occurs where the substance that evaporates faster disappears and then occurs with the next substance.

Similarly, through support within a fractionation column, the first substance is condensed back into the flask, while the other substance travels through the tower until it meets the condenser. After this, the thermometer is responsible for maintaining a constant temperature almost to the boiling point .

This at the end of the whole process will leave the most volatile solution in one of the glasses , while in the other, which would be the glass ball, it will contain the less volatile liquid.

The fractional distillation towers are made up of:

How it differs from simple distillation

This makes it easier to maintain low temperatures within vapors and liquids. That is why in this process, liquids with a lower boiling point evaporate while those with a higher boiling point as a vapor become liquids.

This process is widely used at the industrial and laboratory level , because it allows operators to separate a liquid mixture . That is why it is represented as a physical separation which has many advantages at the level of the different applications.

At first it helps oil companies which in their fractional distillation towers separate the extracted liquids called petroleum, allowing them to be refined , and this is what happens in companies that produce wine or in pharmaceutical industries, especially naturists .

Although fractional distillation presents us with a great variety of advantages, it has a single disadvantage and that is that within its process there is a part that is more or less close to half of the condensed distillate, which must restart the process within the tower where from the point where the mixture is boiled and therefore the heat must be increased.

In the same way, thanks to the operating system of the towers, they allow to save the temperature, that is, the heat in an exponential way and therefore the distillate that is obtained, can also serve to preheat the mixture that is starting the process.

Lewis structure: what it is, how to do it, examples

What is the liquid-vapor equilibrium?

What is heat of combustion?