One of the most amazing aspects that we can know about gases is that, despite the great differences in the chemical properties that each one of them has, all gases more or less obey the gas laws . Gas laws refer to how gases behave with respect to pressure , volume , temperature, and quantity . 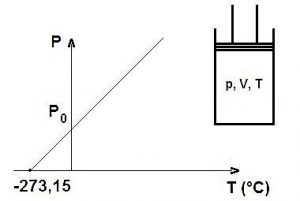 The Gay-Lussac Law states that when the gases react , they do volumes that have a relationship single one another, and that the volume of the formed product, if gaseous , maintains the temperature and pressure constant .

What is the Gay-Lussac law?

Gay-Lussac’s law is a law that tells us that depending on the volume  that exists constantly , the pressure  of a gas will be directly proportional to the temperature . When the temperature is increased, the molecules that a gas has mobilize more quickly and for this reason the number of shocks that occurs against the walls increases, in other words, the pressure is increased since the container has fixed walls and its volume cannot change.

The law was first published by Louis Joseph Gay-Lussac in 1802, but it made reference to the unpublished work of Jacques Charles , from around 1787, which led to the law being usually attributed to Charles. The relationship had been anticipated earlier in the works of Guillaume Amontons in 1702.

The scientist who proposed the law was Gay-Lussac who was born in St. Leonard , a town in southern France , and who studied at the École Polytechnique in Paris . Upon leaving it, in 1801, he began his work in the Department of Roads and Bridges. He began his investigations when he was chosen by Berthollet to work as his assistant in government chemical establishments .

Gay-Lussac’s law states as a statement that:

“At constant volume , the pressure exerted by the gas is directly proportional to the absolute temperature it supports”

The mathematical equation or formula that explains Gay-Lussac’s law is written as follows:

Some experiments that can be done with this law are:

Some of the applications in which we can observe this law are the following:

Importance of the Gay-Lussac law

In everyday life the Gay-Lussac law has a wide range of applications and some of the most common examples are mentioned below:

What is chemical periodicity?