What does genetically modified organisms mean?

Genetically modified organisms are considered one of the most recent developed areas and an overview of it is listed below in detail.

The Nobel Prize was named after the scientist Alfred Nobel who recommended establishing this prize with all his wealth in 1885. He invented dynamite and believed that his invention would bring peace to the world.

“Dynamite will bring peace faster than thousands of world conferences, when men realize that entire armies can be destroyed in an instant. One will be committed to peace immediately, ”but in fact his invention developed many tools of modern warfare.

Dynamite is a modern technology that has caused the death of many people, but the impact of technical progress was not limited to the negative side only, but also contributed to improving and facilitating people’s lives in various fields such as: medicine and electricity.

GMOs are considered one of the most recent developed areas and the most controversial, according to companies and scientists designed for GM crops, this technology does not harm humans but rather benefits the environment, and it is the only way to provide food in light of the increase in population, and on the other hand groups rejecting GMOs complain about .

The health problems that these organisms cause to humans and animals and claim that they destroy the environment and benefit only large companies. So why do scientists develop new organisms?

Crop scientists and engineers are trying to find solutions to the problems facing the world such as the shortage of crops due to pests and insects, for example ready-made corn that is resistant to pesticides is better for the environment because it reduces the amount of herbicides that farmers use.

In both examples, scientists set off from a socially responsible drive to create a genetically modified organism, but it is difficult to predict all the good and bad effects of this technological advance.

To understand the effects of using GMOs we need an unbiased source of information. 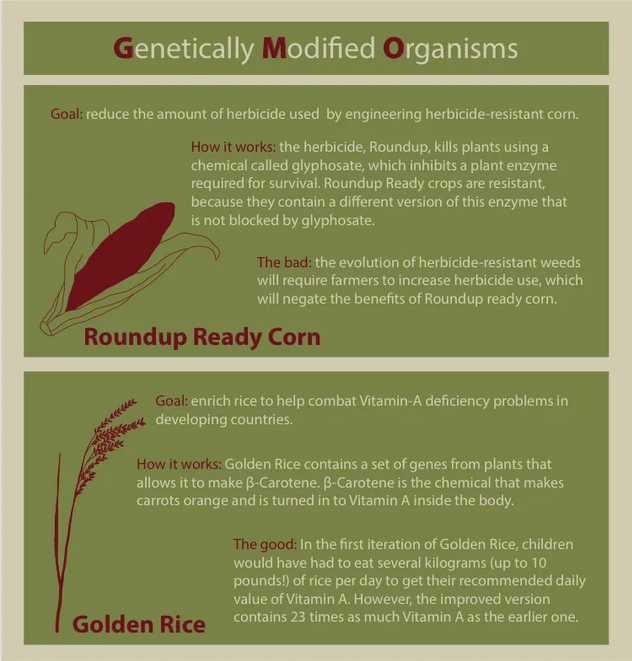 Herbicides are sometimes highly toxic chemicals, used to kill weeds that share crops with space and food, some selective pesticides only kill weeds and do not harm plants, and others like non-selective roundup that kill weeds and crops together.

Scientists thought that the greater the resistance of crops to pesticides, the more effective the use of pesticides and the less time it took to spray the field with less pesticides. The lower use of pesticides is better for the environment, which is why specialists have developed corn and soybeans for herbicide resistance.

Chemicals in round-up herbicides are called glyphosate, as glyphosate works by inhibiting a plant enzyme that helps make some of the amino acids that plants need to survive.

Pesticide-resistant crops contain enzymes that do not inhibit glyphosate, so these crops reduce the use of herbicides. Based on the herbicide use data and other data previously published in a number of scientific sources, herbicide use has actually decreased.

There is always room for development when a new technology such as GMOs appears, science is an iterative process that leads to successive improvements, a greater understanding of the problem, and the development of better technologies.

Golden rice is a strain of rice that contains a set of genes that make it able to make beta-carotene, which is the substance that makes carrots orange and turns into vitamin A inside the body. These genes come from other plants that naturally make beta-carotene, such as corn and narcissus.

Golden rice was developed to help solve the problem of vitamin A deficiency in developing countries where there are few foods that contain vitamin A, as deficiency of this vitamin poses a danger to children and pregnant women and may lead to blindness and death.

Currently, vitamin A deficiency can be prevented by taking supplements provided by nutritional organizations, but golden rice may be a better option because rice is a staple food in many developing countries, and it may be difficult to convince children to take the supplement.

At the beginning of the emergence of golden rice, children had to eat several kilograms (up to 10 pounds) of rice to get the amount the body needs of vitamin A, so scientists developed rice by switching one of the genes taken from narcissus to one from corn because the corn genes are better, and so The amount of vitamin A increased by 23 times.

Scientists have proven that rice is a good source of vitamin A, such as capsules of supplements that contain the recommended beta-carotene value for children, by taking a blood sample from children who ate rice and others who took the supplements, and knowing the amount of beta-carotene that may be converted into vitamin A, the scientists found that the amount .

The beta-carotene in golden rice is converted to vitamin A equal to that in the supplement.

Scientists are still concerned about the decrease in the amount of vitamin A in golden rice after storing it for a long time, as there are no studies on this topic currently available, but scientists are working on it.

Technical progress may lead to results whose harm outweighs their benefit, and here lies the importance of a rational discussion based on unbiased scientific data, as it reveals potential negatives through which we can make improvements.

When it comes to GMOs, there are many aspects that could be improved, yet most experts think that if population growth continues, current farming methods will not be sufficient to feed everyone.

“If questions affect human well-being, they will have answers to them.” Indeed, scientists are always looking for these answers.

When the public is educated about the problems the world faces and research is supported that aims to find socially responsible solutions, scientists can work to make the world a better place.