To be able to talk about hemiacetal we must also talk a little about carbohydrates . Carbohydrates, carbohydrates or carbohydrates, as they are generally known, are a series of biomolecules that are made up of carbon, hydrogen and oxygen and that have important functions for living beings, such as providing energy through glycogen and glucose . That said, we can say that hemiacetal is a chemical group that is born from the reaction of an aldehyde and an alcohol . 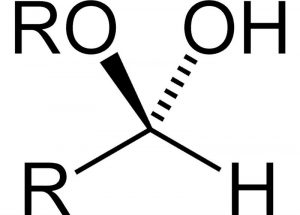 What is a hemiacetal?

In the area of carbohydrate chemistry , a hemiacetal is a molecule that contains a hydroxyl group and an alkoxide residue attached to the same carbon atom formed by the nucleophilic addition of an aldehyde with an alcohol.

Characteristics of a hemiacetal

The main characteristics that we can observe in a hemiacetal are the following:

Formation of a hemiacetal

A hemiacetal is formed when an aldehyde reacts with an alcohol . There are two different ways this can occur, such as a neutral or acid catalyzed reaction . The mechanism of this reaction can be defined or explained in three different stages, which are:

The formula used for hemiketals is as follows:

The formation of hemiacetals can also occur when aldehydes and ketones are added . These reactions are considered as equilibria displaced towards the initial carbonyl, with the exception of those that are formed from highly reactive carbonyls such as methanal.

Cyclic hemiacetals can also be formed from hydroxyaldehydes and hydroxyketones when stable 5- or 6-membered cycles occur. Another type of reaction is the synthesis of acetals .

When we dissolve an aldehyde or a ketone in an alcohol, a slow establishment of the chemical equilibrium between the two compounds occurs and with this a new compound called hemiacetal is produced . After the attack has taken place, a ring is created that is unstable , because the oxygen originally from the hydroxyl remains only with three bonds while the oxygen from the aldehyde loses one of the carbon bonds, leaving only one bond.

The instability that occurs is alleviated when there is the loss of a proton of the oxygen that was originally the hydroxyl to give rise to an ether. As this happens, the oxygen takes on a proton turning into a hydroxyl group . Most simple sugars exist primarily in the cyclic hemiacetal form , such as glucose.

One of its main importance is its participation in the sugars that make up carbohydrates, mainly cyclical ones.

Some examples of hemiacetals are as follows:

What are point defects?

What is a homogeneous mixture?

What is the rate constant?