The Castilian is a language with many words so immense , so far there is no person in the world who has managed to know all understood its meaning. And is that each matter has its terms and definitions for each thing, so it is something impossible to achieve, for example the fisca has the thermo-reactions and the chemistry to the hydracids . 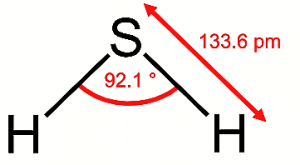 They are also known as acidic acids , binary salts or acidic hydric , they are made by two acidic binary compounds which must be a hydrogen (of the halogen or antigen group in the periodic table) and a non-metal, without the presence of oxygen.

Among its main features are:

The symbol for Hydrogen (H) is written first, then the valence of the Nonmetal and followed by the symbol of the nonmetal, example:

Hydracids are very acidic solutions, although some are sometimes more acidic than others, and they have acidic protons that are available to react with other substances . They react with metal oxides only to produce a salt + water , they are also used with the active metals to make a reaction and form a salt + Hydrogen

They contain an acid flavor , like that of a citrus fruit , they can change the color only on paper, such as: from blue litmus to pink, from methyl orange to red but leaves phenolphthalein colorless (PH indicator, they are corrosive and they cause severe burns to the skin , in aqueous solutions they conduct electricity.

There are two ways to obtain these acids:

They can be formed by simple solutions that correspond to hydrogen halides in water graphically it looks like HX (g) => HX (ac) , where HX (g) is very soluble in water and the level of solubility is unbalanced but in its dissociation ionic is stable and ready to release acidic protons.

Dissolution of salts of non-metals with acids.

It will be better understood with an example, if table salt is joined with neatly concentrated sulfuric acid it is denoted like this

Here it is possible to see that the sulfuric acid donates an acid proton to the chloride anion and passes on the other side of the arrow as hydrochloric acid. Hydrogen chloride , HCl (g), can escape from this mixture because it is very volatile, especially if its concentration in water is very high. The other salt produced is sodium acid sulfate, NaHSO 4 .

As solvents and cleaners

In a natural way, the hydracids are responsible for dissolving different types of matter because they are very strong acids and are generally suitable for cleaning any type of surface , the process is that the acidic protons adhere to dirt or impurity and when there is water they are washed away.

Hydrofluoric acid  cannot be used to clean glass as it will dissolve it on the spot.

These 2 acids are capable of dissolving rocks or solid samples , to later be used for analytical or production purposes on small or large scales.

They serve to accelerate reactions since acids have that quality, it reduces the time it takes to react if there is more acid presence.

As reagents for the synthesis of organic and inorganic compounds

In addition to giving acidic protons, they also contribute their anions when they are required, these anions in turn can be reacted with organic and inorganic compounds depending on the case and thus form a specific halide.

These halides can have several applications , for example, to synthesize polymers such as Teflon and they are also added to molecular structures for the formation of specific drugs.

There are two ways of being named and it is because it depends on which chemical elements they react with: