The hydrochloric acid is basically the aqueous solution of the gas hydrogen chloride . It is also the main component of gastric acid , an acid that is produced naturally in the human stomach which serves to help digest food. This type of acid may be produced in a synthetic for use in various applications industrial and commercial , and can be formed by various manufacturing processes, such as the dissolution of the hydrogen chloride gas in water. 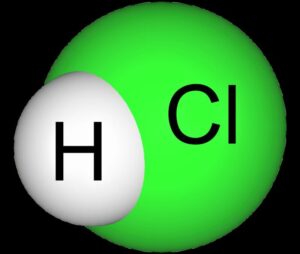 What is hydrochloric acid?

The hydrochloric acid or acid muriatic as is known is also a chemical compound of type binary which is composed of molecules including one atom chlorine and one atom of hydrogen .

Its history is quite old, in medieval times it was known by the name of the salt spirit and its discovery is attributed to Priestley Glauber. During the First Industrial Revolution there was a significant increase in the use of alkaline substances and for this reason, Nicolás Leblanc managed to develop a method to obtain acid by increasing production. This process using coal, limestone and sulfuric acid to transform water into soda, releasing at the same time hydrogen chloride as waste product .

In this process, large amounts of hydrochloric acid were released into the atmosphere and it was basically a waste product. In 1863 , a law was created that prohibited industrial companies from releasing acid and absorbing it in the same industries, which led to the production of acid in large quantities worldwide. In the twentieth century, the aforementioned process changed avoiding the production of acid, but by this time, it had already been given special importance in several fields, so it was decided to invest in processes for its manufacture .

In its structure, each of the HCl molecules is made up of a hydrogen atom and a chlorine atom.

The formula for hydrochloric acid is HCl.

As for its nomenclature, the acid can be known through the three systems that exist:

Regarding the physical properties of hydrochloric acid, it is important to mention that aspects such as its melting point , boiling point and its density will depend largely on the concentration of HCl that is present in an acid solution. Approximately its following physical properties can also be mentioned:

Some of its main chemical properties are mentioned below:

In this process, a common salt solution is electrolyzed to obtain chlorine , sodium hydroxide and hydrogen . The resulting chlorine gas is then mixed with hydrogen gas to form pure HCl . This type of procedure involves an exothermic type reaction.

There are several uses that can be given to hydrochloric acid, among the most important we find:

Hydrochloric acid is beneficial in many aspects of the industry . It is a fundamental ingredient in the creation of cleaning products , in the field of metallurgy, making it possible for metals to be purified. It is useful for removing stains, sediment or impurities.

It is also an acid which is found naturally within the body of the human being, specifically in the stomach in which assists in the decomposition of the foods ingested and collaborates also strengthen the immune system.

It is important to remember that this acid has a highly corrosive effect, so its use involves a series of health risks. If inhaled , it can cause irritation to the eyes, nose, throat and even bronchial tubes, producing a series of complications and even chemical burns. It can also produce several serious pulmonary symptoms such as edema, shortness of breath and increased respiratory mucus, this acid can leave serious sequelae after being inhaled.

If it is in contact with the skin, it can cause burns to the skin and eyes, which cause itching and intense pain. A splash of acid can cause conjunctivitis , red eyes, pain and blurred vision, in severe cases, corneal burns. When ingested , it will cause severe burns to the mouth, throat, stomach and difficulty in swallowing food. Nausea, vomiting, abdominal pain, and diarrhea are common, and it can even perforate the digestive tract, leading to severe shock , arrhythmias, and death..

What is the vitreous state?