In the field of chemistry, biology and physics, there is a group of intermolecular forces that act on groups of molecules considered stable or on some functional groups that contain large molecules or macromolecules. This type of force is also known as the Van de Waals force . They are forces that despite being weak can generate a large number of phenomena and provide an explanation about why some molecules that are light are liquid or solid at a certain temperature and pressure , generally normal. 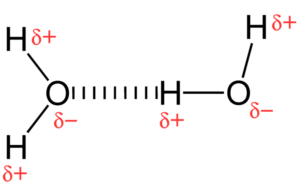 Intermolecular forces are all those interactions whose main function is to be able to hold molecules together , they are a type of electrostatic force that provides a series of properties to liquids and solids.

It is important to remember that there are atoms inside a molecule and that they remain united. This union occurs thanks to intermolecular forces , which can be essentially ionic or covalent bonds . This type of force is what is responsible for holding all the molecules together and also, they are responsible for providing a series of characteristics with respect to the chemical part of the substances.

The main characteristics that can be observed in intermolecular forces are the following:

There are several types of intermolecular forces which are mentioned below.

This type of force is located in the group of produces stabilization of the molecules forming a non-covalent chemical bond in which two types of forces participate, one is dispersion or attraction and the other, repulsion . The dispersion force is electrostatic because atoms have the ability to form small dipoles that, when electrons rotate around the nucleus, the dipole causes the atoms to polarize creating small attractive forces between the dipoles.

Electrostatic repulsion occurs in the electronic shells of the atoms that are located next to each other and the result is a minimum distance between the two nuclei. It is worth mentioning that the energy of the Van der Waals bond is 1 – 2 kcal / mol. Finally, the Van der Waals bond has three types or classes of bond, those of orientation, those of induction and those of dispersion.

This type of intermolecular force occurs when the ions that exist in a certain substance can interact with the dipoles that exist in a polar covalent molecule . In the polar bond, the atom that presents a higher electronegativity has the ability to attract electrons and in this way produces a negative dipole around it while at the same time a positive dipole is formed in the place where there is less amount of electronegativity.

This type of force refers to the different electric and magnetic fields that exist in time and that influence electromagnetic waves. There are four different forces, gravity , electromagnetism , strong and weak nuclear interaction .

The properties of the intermolecular forces will depend on the effect they produce on the physical and chemical properties of the elements. That said, there are properties related to state of aggregation , melting and boiling point , solubility , molecule density , and viscosity .

How they differ from intramolecular forces

Intramolecular forces are those that unite the atoms within a molecule and are forces that, in order to be executed, require the presence of a chemical change to later determine the chemical properties found in a certain substance. On the other hand, the intermolecular forces act on the molecules causing them to repel or attract each other , they are then in charge of determining the different physical properties of the elements.

This type of force is important mainly in gases as they are responsible for how they can behave. They also have a fundamental role in the states of aggregation of matter, with this we refer to the liquid, solid or gaseous states. These bonds actively participate in a series of processes in living species and in biological systems, such as enzymatic catalysis .

Without this type of force, life could practically not exist since they are in charge of giving the properties to substances , for example, if water did not have bonds through intermolecular forces, it would change state very easily and could not develop no life on earth. They are forces that are present in alcohol, DNA, carbohydrates, proteins, glucose and cellulose, without them, all these substances and many more could not exist.

Ammonia has two types of intermolecular forces, London’s and the interaction between dipoles . This happens because in this element there is a free electric cloud and for this reason, the dipoles are different from zero.

Ethanol is a highly volatile liquid and uses dipole-dipole forces to control its molecular weight. It has a large number of hydrogen bonds and thanks to the intermolecular force, this substance has a fairly high boiling point.

Water has intense intermolecular forces and are known as hydrogen bonds , they act through a dipole-dipole force that occurs between the hydrogen atom and the electronegative atom. It also has small elements as well as a great electronegativity which causes partial charges to occur.

Methane has London intermolecular and permanent dipole forces as it has nonpolar molecules.

This substance also has hydrogen bonds , considered as the main intermolecular forces and for this reason, this type of alcohol has a high boiling point . Also, it is quite polarized due to hydrogen and oxygen bonds.

The structure of diamonds depends on intermolecular forces which are based on the formation of hydrogen bonds .

What are nitrogen oxides?