The ionic bond is the link type in which electrons can be transferred from one atom to another, resulting in the formation of ions positive and negative . Electrostatic attractions between positive and negative ions hold compounds together. It is also known by the name of electrovalent bond and is a type of bond formed from electrostatic attractionbetween ions of opposite charge in a chemical compound. This type of bond is formed when valence electrons that are located in an outer position of an atom are permanently transferred to another atom. The atom that loses the electrons becomes a positively charged ion or cation , while the one that obtains them becomes a negatively charged ion or anion . 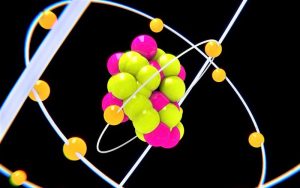 What is an ionic bond?

The ionic bond is in which atoms have the ability to transfer or share their valence electrons . Some gain and others lose electrons to produce a noble gas configuration .

Some of the most notable characteristics of ionic bonds are as follows:

How an ionic bond is formed

For the formation of an ionic bond to occur correctly, there must be a reaction or a combination of chemical reactions . The ionic bond occurs when there is a union of two atoms through the ionic bond , which happens when an electron leaves the atom that has a lower electronegative charge and becomes part of the electronic cloud of the atom that is more electronegative. Ionic bonds occur between ions of different sign as charges of different equivalence attract each other.

Ionic bonds are classified depending on the ions that their compounds have. In this way, there are anions and cations .

Anions are ions that have a negative electrical charge . Anions do not have a large number of electrons and are made up of nonmetals , although there are a few that are metals and nonmetals. Some examples of them are:

Cations are ions that have a positive electrical charge . The most common cations that exist are formed from metals , although some are non-metals.

Some of its main properties are the following:

They are formed by an atom attached to another via a bond covalent , the bonding electrons are shared by two atoms. In the covalent bond , the two non- metallic atoms share one or more electrons, that is, they join through their electrons in the last orbital, which depends on the atomic number in question.

The sodium chloride or salt common is an example of ionic bond: when preparing sodium and chlorine combine, losing the first one electron is captured by the second. In this way, two oppositely charged ions are formed: a cation that has a positive charge and an anion that has a negative charge. The difference between the charges of the ions then causes an electromagnetic interaction force between the atoms that is capable of holding them together. The ionic bond is the union in which the elements involved will accept or lose electrons. In solution, ionic bonds can be broken and the ions are then considered to be dissociated.

What is the covalent bond?

The 12 Examples of PH Neutral Substances