In the field of chemistry there are several types of chemical compounds of great importance, one of them is oxides . These are a type of binary compound , that is, they are composed of two chemical elements in which the oxygen atoms manage to join other different elements. This is the case of iron oxide , a chemical compound that is made up of iron and oxygen . 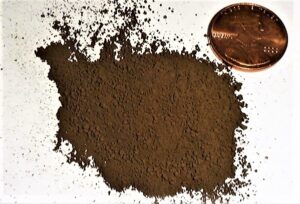 What is iron oxide?

The iron oxide is a type of chemical compound that consists of iron and oxygen . In total 16 different types of iron oxides are known, which are divided or classified into three different categories: oxides , hydroxides and oxyhydroxides .

Among the most representative characteristics of iron oxide are the following:

So generally , the iron oxides are a type of tetrahedral structure and sometimes octahedrons in which there is an iron core. These structures will always depend on the pressure and temperature conditions that exist . It is common to observe that the anions align themselves to form sheets in which the cations are housed .

The chemical formula for iron oxide is known as Fe3O4 .

The three different types of nomenclatures that exist are used to name iron oxide, these are the following:

Some of the chemical properties of iron oxide are mentioned below:

Oxide can be obtained naturally first as it is a product that was formed millions of years ago. In this case, it can be extracted in the mines that are mined in the open pit or it can also be located in the internal part of the mine when cavities are opened in the seam . Subsequently, it must undergo a delicate selection and classification process and then move on to a packaging phase .

It can also be obtained through a chemical reaction in which different types of acids are added to scrap or metal and then subjected to high temperatures and pressures to create a paste in this way, which will have a tonality that will depend largely from the acid and the temperature that has been used. Then, the paste obtained is dried and then packaged for proper marketing .

Iron oxides in their natural state are widely used as pigments which turn out to be fundamental in some types of industrial applications . It has been approved by the Food and Drug Administration to also be used in cosmetic products and inks , such as those used for tattooing.

Both natural iron as synthetic type can also be used in the industry of the cement as it is the ideal means to give color , this type of material in order to create colors for stucco , tiles , blocks , etc. It is a fundamental component in the manufacture of paints , waterproofing , decorative paints and different types of coatings .

It is also used for the manufacture of some plastics such as PVC and in the papermaking industry . It also plays an important role in the glass , ceramics and asphalt production industries . As it has a high amount of crystallization energy , it is also used in the field of nanotechnology .

In general, the particles of this type of oxide manage to enter the human body through the respiratory tract and when this happens, a condition called pneumoconiosis can occur , which produces symptoms such as dyspnea, cough and expectoration that can even lead to pulmonary fibrosis . Iron oxide can be very toxic when inhaled by humans, when it is exposed to the smoke that is generated by its burning, it can cause a flu-like illness. When exposed to rust without eye protection , it can even stain the eyes due to the presence of iron. In the case of oxideFerric-type iron , large explosions can occur if not treated correctly because this type of oxide is highly flammable and can ignite spontaneously even in air.

The 12 Examples of PH Neutral Substances