By developing more precise ideas about elements , compounds, and mixtures , scientists began to investigate how and why substances reacted with each other. The French chemist A. Lavoisier was the one who laid the foundations for the scientific investigation of matter by describing that substances react according to certain laws. These laws are called laws of chemical combination . 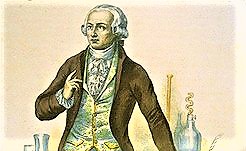 The law of Lavoisier is a law that tells us that in all reactions chemicals that are made, the mass of the reaction components are preserved , never destroys nor creates new matter, the only thing that happens is that reorganizes .

The law is one of the pillars of the birth of the chemical equation along with the modern nomenclature that chemical compounds have . It is named after Antoine Laurent Lavoisier , a French chemist whose work was so important that it still stands as the basis of modern chemistry.

Lavoisier is considered to be the forerunner of modern chemistry , and he was the one who made one of the most important discoveries in this science, the Law of Conservation of Mass . During the 18th century, little attention was paid to the quantitative aspect of science. Substances were mixed, their powders and gases were observed and described, but they were not measured. Then Lavoisier appeared who thought that measurement was the most important part and that this was the basis for chemical experiments .

Lavoisier was born in Paris in 1743, had an excellent education, received a law degree , then studied Astronomy , Natural History , and Chemistry. He worked for years in science and technology and discovered the secret of what the alchemists called the “transformation of water into land” and that for them was clear proof of the transmutation of elements .

He established that air is a mixture of 27% oxygen and 79% nitrogen . He specified the notion of pure substance , adopting Boyle’s concept of ” element “. He used the Principle of Conservation of Matter and made the first calorimetric measurements . He demonstrated the presence of oxygen in bases and acids and collaborated in the elaboration of a new chemical nomenclature , very similar to the current one, in which the names of the substances reflect their chemical composition.

Lavoisier’s law was proposed by Antoine-Laurent de Lavoisier (1743-1794) who was a renowned French economist, chemist, and biologist, an important figure in the chemical revolution of the 18th century.

The statement of Lavoisier’s law can be given in three different ways which are:

Some of the most important applications of the law are the following:

Thanks to its law is known today that the theory of the phlogiston on combustion was false, that matter can get to change and create new substances, but does not have the ability to come out of nowhere or disappear . Thanks to his law of conservation of matter , the foundations of current nomenclature and chemistry were created , and measuring compounds became of vital importance for research in the area of ​​chemistry.

Some everyday situations where we can observe Lavoisier’s law are the following:

What is potassium sulfate?