The manganese is an element mineral that is nutritionally essential and the same time can be potentially toxic . The derivation of its name from the Greek word magic is still appropriate, because scientists are still working to understand the various effects of manganese deficiency and manganese toxicity on living organisms. It is one of the metals located in the transition group of the first long periodof the periodic table and is located between chromium and iron, as it has properties in common with both metals. Although little known or used in its pure form, it is of great practical importance in steelmaking . 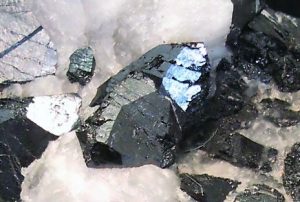 Manganese is a micro mineral considered essential , although its consumption needs are not very high. It is found in foods of plant origin and is responsible for regulating the different reactions of cells .

The origin of the name is a bit complicated to establish. In ancient times, there were two black minerals of Magnesia called magnesium , but they were thought to be different in their kind . The male magnesia attracted the iron , and iron ore was now known as magnetite or magnetite, and probably gave the term magnet. The female magnesium mineral did not attract iron, but was used to discolor glass . This female magnesite was later called magnesia, known today as pyrolusite or manganese dioxide . In the 16th centuryManganese dioxide was called manganese by glass manufacturers. Michele Mercati called black magnesia manganese, and finally the isolated metal is known as manganese. The name magnesia was eventually used to refer only to the white magnesia alba or magnesium oxide , which provided the magnesium name for the free element when it was isolated. Egyptian and Roman glassmakers used manganese compounds to add or remove color from the glass. Its use continued through the Middle Ages to modern times and is evident in the glass that was used in the 14th century in Venice .

It was proposed to be listed as an element by Carl Wilhelm Scheele in 1774. The mineral was discovered by Johan Gottlieb Gahn , a Swedish chemist , who discovered it by heating pyrolusite in the presence of coal in that same year. Today, most manganese is still made from pyrolusite , although it is typically burned in a furnace with powdered aluminum or treated with sulfuric acid to form manganese sulfate, which is then electrolyzed.

It is an element characterized by its great hardness , by having quite high boiling and melting points and because it is a good conductor of electricity and heat . It can rust very easily when it is in the air forming an oxide layer.

It can be used in many applications, primarily to eliminate the rattle of the engines, which is achieved by adding a manganese compound to gasoline unleaded. Another of its uses is in the manufacture of standard disposable batteries and for the production of iron and steel . It can form alloys with aluminum and give rise to a metal that is more resistant to corrosion. Very useful in the coloring of glass and ceramic pieces and in some countries it is used in the manufacture of coins . It is essential for the proper development ofhuman life , although in high concentrations it can be problematic for health. Ensures the proper development of bones , activates some enzymes in the body. It is linked to the synthesis of sex hormones . It is necessary to assimilate vitamin E and B1 in the body. It participates in different organic reactions such as, for example, the synthesis of fatty acids, it also participates in the manufacture of cartilage .

Manganese comes from pyrolusite , so it can be obtained from the combustion of this mineral. It cannot be found in its purest form in nature , only in meteorites . Most of the deposits are in Ponupo, Oriente. Also, it can be found in different types of food .

The main natural sources of manganese are: dried fruits , sunflower and sesame seeds, the whole grains found in breads, legumes such as beans, lentils, chickpeas and soybeans, in vegetables that have green leaves, in the leaves of the beets, nuts, fruits such as peaches, in egg yolk , coffee and tea.

What is the oxygen cycle?