The melting point is known as the temperature at which a matter that is in a solid state becomes a liquid state. For the change of state to occur, certain requirements must be met, such as that the temperature is always constant.

The melting point is a physical and intensive property that matter possesses, this means that it is related to the number of substances or the size of the bodies. During this process, solid matter begins to heat up until it reaches the melting point and it is at this time that its state change occurs.

and is then transformed into a liquid. If the liquid continues to heat up, it can reach its boiling point: from this temperature, a new change of state takes place, this time going from liquid to gaseous. It should be noted that, while the boiling point is directly related to pressure, the melting point has a little link with this factor.

To find the melting point, it is necessary for the molecular forces to break that hold the crystalline structures of a compound together. Therefore it depends greatly on the balance of the different intermolecular forces that occur in a compound. 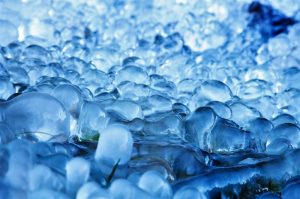 What is the melting point?

It is the temperature at which matter that is in the solid state manages to go to the liquid state. But to achieve this change, some requirements must be met, including maintaining a constant temperature. In this process, the matter that is in the solid-state begins to heat up until it reaches the melting point, producing the change of state and transforming into a liquid.

Determination of the melting point

as with the boiling point it is a function of the external pressure at which it is found. It is used to determine the degree of purity of a solid.

As the solid changes from a solid to a liquid state, the temperature remains constant. In most substances, the melting point and the freezing point are the same. But this does not happen all the time.

Unlike the boiling point, the melting point of a substance is very little affected by pressure and, therefore, can be used to characterize organic compounds and check their purity in this way.

The melting point is determined by a computer named Thiele or in a block merger ng. The substance is introduced into a capillary tube and placed in the measuring equipment. Then it proceeds to heat very slowly and the moment when it changes state is observed.

The temperature at which this transition of states occurs will then be the melting temperature. When this change of state occurs, a collapse of the solid structure is observed inside the capillary tube, accompanied by the formation of a transparent liquid.

At that time the temperature is recorded marking the term ómetro. Currently, melting blocks have been designed to replace Thiele in the determination of melting points.

The melting point is widely used in different fields of work that require contact with chemical substances. The biotechnology sector uses it enormously to know the physical properties of its components.

It has been very helpful when studies have been carried out on simple bond hydrocarbons, which, through some more complex studies with respect to their melting point, it was possible to verify the type of structure that formed them.

It is important within the field of chemistry both organic and inorganic, to study in academic fields in the area of organic chemistry therefore, we can say that it is of utmost importance both in the student field and in the workplace.

Within them, it is possible to observe the techniques and procedures developed by students and researchers to determine a melting point for a certain compound.

Chemical fusion is used in different areas, but one of the most important we can mention is metallurgy.

Casting is called the process by which metals change from a solid to a liquid state, usually to be later introduced into a cavity where it solidifies, giving a new shape to something that in its solid form there would have been no way to modify.

Other more common examples are solid ice melting into liquid water, melting of paraffin (like the one used in candles) and its passage to the liquid state after the candle has been lit, the chocolate melting and turning into liquid chocolate, and so on, hundreds of examples that we could mention.

What is the lever rule in the Phase Diagram, Formula & Explanation

Types of Monochromator Examples and their Functions in Chemistry Lab

Coordination number: what is it, calculation, examples