The metallic bond is a force that is responsible for keeping together the atoms in a substance metal . In most cases, the outermost electron shell of each of the metal atoms overlaps with a large number of surrounding atoms. As a consequence, valence electrons continually move from atom to atom and are not associated with any specific pair of atoms. In other words, the valence electrons in metals, unlike those in covalently bound substances, are not localized, they are able to roamrelatively freely throughout the entire length of the glass. The atoms that leave the electrons are converted into positive ions , and the interaction between such ions and valence electrons gives rise to the cohesive or binding force that holds the metallic crystal together. 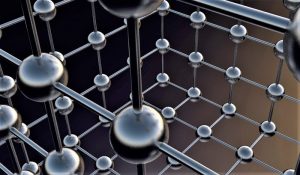 The metallic bond is the one that occurs between two atoms of two metals in which all the atoms lose their electrons in their outermost shells which move freely between them creating an electronic cloud .

Characteristics of the metallic bond

The main characteristics of this type of link are the following:

How the metallic bond is formed

The metallic bond takes place when the combination of metals occurs with each other. It is known that metals need to give up some of their electrons in order to reach the noble gas configuration, the metals then lose the valence electrons , thus forming a cloud of electrons between their positive nuclei.

Among the main properties of metallic bonds we can mention the following:

Structure of the metallic bond

In metallic bonds, each atom is divided into twelve atoms , six of them are in the same plane, three are located above and three below. The electrons are extracted from their orbitals by low electronegativity that possess. It is a link of strong consistency , which is formed between elements that belong to the same species. Although their structure is very close, their nuclei can interact in electronic clouds , packing in three dimensions, which is why the nuclei are surrounded by these clouds.

There are two different theories regarding the metallic bond which are:

Metallic bonds can and are used in activities of daily living . A fairly common example is that of bronze , which is created from an alloy of tin and copper and is used in the construction of bells and statues . The steel , consisting of carbon and iron, is another example. This alloy makes the steel stronger and can be used in the production of cookers and freezers , construction and in the manufacture of bridges .

What are carboxylic acids?

What are anode and cathode?

What is a weak acid?

What is sodium hypochlorite?