A metalloid is a chemical element that has properties intermediate between those of typical metals and non-metals . In general, chemical elements such as boron, silicon, germanium, arsenic, antimony and tellurium are considered under this classification. Rare elements like polonium and astate are also sometimes included. Most  metalloids are important industrial materials , used to make transistors and other semiconductor devices , ceramics, solar batteries, and certain polymers. 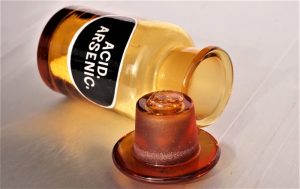 They are the elements of the periodic table that have intermediate properties between metals and non-metals and of which their main characteristic is that they are semiconductors rather than conductors .

The main characteristics of metalloids are the following:

The physical properties include a number of physical properties which also correspond to the metals and non metals. On the one hand they are solid and shiny at room temperature, but at the same time they are quite brittle and not malleable . They also have many intermediate properties of thermal and electrical conductivity allowing them to be used in various things. An interesting physical property is that metalloids contract when they melt .

It is also important to mention that metalloid oxides are amphoteric , this means that they have the ability to act as an acid or base in a reaction to produce a salt and water . The word “amphoteric” is a term that comes from the Greek word amphoteroi , which means ” both “, and this condition depends on the oxidation states that are available in a chemical. Because metals have intermediate oxidation states, they form amphoteric oxides .

Being semiconductors, some have useful properties since they allow the flow of electricity through them, but in a controlled and controllable way. Semiconductors are basic due to their importance in electronics . Semiconductors, especially silicon, are used in the construction of radios , computers , televisions , telephones , and essentially every piece of machinery using computer chips .

Its resistance, lightness and insulation properties allow the construction of special glasses . Aerospace engineers manipulate boron glass for space capsules and other parts of space vehicles. A use that we all know is the production of Pyrex that are clear, strong and shock resistant, it is also used in test tubes , beakers, and shatterproof glass containers .

The insulating properties that metalloids possess make them used for protection against fire . Antimony is primarily used in a wide range of fireproof products. They use antimony to create car seats, clothing, and many other fire retardant products .

Location of metalloids on the periodic table

In the periodic table of the elements, metalloids are located on a diagonal line that goes from boron to astate . The elements on the upper right are non-metals, and those on the lower left are metals.

Some examples of this important element are:

What is a glycosidic bond?