The  Moeller diagram is a diagram that helps to know the order in which electrons fill the orbitals within an atomic structure. It is composed of 4 columns that represent the orbitals defined by the theory (s, p, d, and f, respectively). 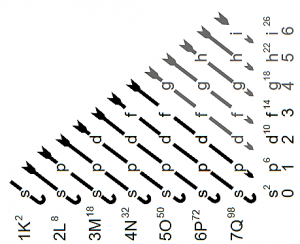 What is the Moeller diagram?

With the development of chemistry throughout the nineteenth century, the need for an appropriate theory to explain the details of atomic structure became increasingly latent.

In order to express the electronic configuration corresponding to each element, the Moeller diagram was developed, which graphically represents Madelung’s rule. and allows one to obtain said configuration quickly and easily. It is also known as the Rain Method.

What is the Moeller diagram?

Determine the order of filling, draw diagonal lines pointing downward, starting on the right and ending on the left. In this way, the beginning of the filling is established in the 1s orbital; then the electronic filling corresponds to the 2s orbital, and so on.

The Moeller diagram follows from Madelung’s Rule, which was developed by the German physicist Erwin Madelung to explain the energy order associated with atomic orbitals. This diagram is also based on the famous Pauli Principle.

Erwin Madelung was a German physicist born in Bonn in 1881 and is known as the person in charge of the Madelung Rule, from which the Moeller diagram is derived. His intellectual activity was mainly devoted to the study of atomic physics and quantum mechanics. He was a professor at the Goethe University in Frankfurt and passed away in 1972.

What is the Moeller diagram for?

This method was developed as a memo technical rule in such a way that the electronic configuration of an atom can be expressed as a function of the Aufbau principle. This implies that the electrons are integrated in a special order one by one to each available orbital, taking their energy levels as a reference.

How to do it

First, the atomic number Z of the element to be studied must be determined, which is associated with the number of electrons found in a neutral atom. Then, the filling of the electrons in the orbitals is determined by drawing diagonal lines pointing downwards, from left to right.

Importance of the Moeller diagram

The importance of this diagram is that it is an easy and simple way to explain and calculate the electronic configurations of the atom based on Madelung’s Rule. This allowed the massification of chemistry as a study science and was the spearhead for the technological developments that occurred a posteriori.

Initially, the atomic number Z of potassium (K) must be known, which, based on the periodic table, corresponds to Z = 19. Then, assuming that this value corresponds to the number of electrons that exist in a potassium atom (K), the indications relative to the drawing of the diagonal lines must be followed to determine the order in which they will be filled in the orbitals. For the case of potassium (K), we obtain 1s 2 2s 2 2p 6 3s 2 3p 6 4s 1 .

What is potassium hydroxide?

What is aluminum chloride?

What are synthetic polymers?

Differences between organic and inorganic compounds