The mole fraction is a unit of concentration that is defined as the equality in the number of moles of a component divided by the total number of moles of a solution . Because it is a ratio, it is an expression unitless . The mole fraction of all the components of a solution, when added together, will equal 1 and is considered a dimensionless unit of concentration . 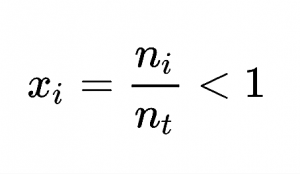 What is the mole fraction?

It is a unit of the area of chemistry that is used to express the concentration that exists in a solute or in a solution . It is the quotient between the moles of solute and the total number of moles in the solution .

For what do you use it

It is also used to express the concentration is in the ratio of the vapor pressure in the solutions diluted and ideals of solids in liquids, in the study of the equilibrium that exists between the liquid and vapors solutions liquid .

The formula to find the mole fraction of a gas is as follows:

Where x is the solute and n is the number of moles that the solute has, measured in moles.

Molar fraction of a gas

The ideal gas law tells us that all gases behave identically and that their behavior is independent of attractive and repulsive forces . If the volume and temperature are held constant, the ideal gas equation can be rearranged to show that the pressure of a gas sample is directly proportional to the number of moles of gas present.

Molar fraction of a solute

Molar fraction of a solvent

The number of moles is obtained through the application of the ratio of mass per mole.

Some examples of mole fractions already solved are the following:

Calculate the molar fraction of each of the substances in the solution of: 10 moles of methanol, 1 mole of ethanol and 8 moles of water.

Calculate the mole fraction of each component of a solution of 40 grams of ethyl alcohol (CH 3 CH 2 OH) and 100 grams of water.

What are the physical properties of matter?