In the field of chemistry there are many words that are of vital importance for its proper knowledge, one of them is the molecule . The development that science has undergone over the years has established that molecules are very common to find within the field of organic chemistry and in the gases of the atmosphere . The molecule, a set with a good organization and interrelation between its atoms of different nature, has the great ability to create a stable set which is also electrically neutral. 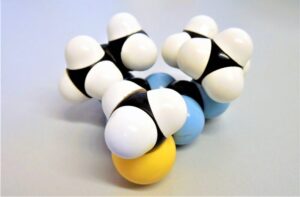 What is a molecule?

A molecule is the smallest particle that has the physical and chemical properties that a substance has and that is also composed of two atoms which may or may not be the same.

Characteristics of a molecule

The main characteristics of the molecules are mentioned below:

There is a classification of molecules that is based on the complexity of their constitution. Thus, the following types can be found:

According to the ability of the molecule to have stability or instability in the electromagnetic field, the molecules can also be of the following types:

The movement that the molecules present is of a constant type. It is known by the name of molecular vibration

Molecular energy is present in all objects because they are composed of molecules which in turn are always in motion thanks to a series of factors that can activate molecular energy . Energy is limited in motion and quantum constraints that give it the ability to have different types of speeds and energies.

The size of a molecule will always depend on the number of atoms that make it up. It is common to find sizes ranging from 2.4 ångström to those that can be seen with the naked eye. As for its mass , it is extremely small and is also related to the size of the molecule. The number of molecules is a universal constant and is known as Avogadro’s number , its value is 0.023.1023.

Parts of a molecule

The parts that a molecule has are its atoms , which can be two or more. They do not have specifically differentiated parts for this reason, but it is worth mentioning that the nucleus of each of the atoms that make it up are also part of it. This includes the number of protons and neutrons that they have as well as the electron clouds that exist in the orbit. The macromolecules can become divided into parts which are long chains of molecules.

To understand the formation of a molecule, it is necessary to understand that all groupings of atoms can reduce their energy, thus giving rise to the formation of the molecule , this happens through a chemical bond known as covalent . These bonds, in turn, can only be caused by the exchange between electrons . It may be that two atoms have the ability to exchange electrons without having to alter their configuration, and when that happens, molecules are formed.

How it differs from an atom

The main difference between an atom and a molecule lies in which atoms are particles having a structure more simple and also are smaller than the molecule. In addition, all molecules are composed of groups of atoms which are the most basic unit that exists in matter.

One of the main reasons for its importance is that the molecule represents 99% of all the mass that makes up cells . In addition, they are also made up of elements classified as organic molecules which surround carbohydrates , proteins , lipids and nucleotides , all of them vitally important for life.

The water molecule is made up of three different atoms , two of them are hydrogen and one is oxygen. These atoms are linked by means of a covalent bond and their formula is H2O .

The carbon dioxide molecule is nonpolar and has a symmetrical linear structure made up of two oxygen atoms.

Ammonia molecules have a composition of NH3.  Its hydrogen atoms are equivalent and it also has a pyramid shape. Hydrogen atoms are present in it, which bind to nitrogen , which, in addition to being small, is electronegative, which is why ammonia has intermolecular bonds with hydrogen.

The ozone molecule is allotropic , this means that its molecular formula is different from oxygen and is composed of three atoms of it. It can form naturally in the atmosphere through oxygen and electrical storms, but it can also be created industrially.

In the case of the hydrogen molecule, it is formed by means of a covalent bond and is composed of two hydrogen atoms with their respective electrons.

The oxygen molecule is one of the most stable , it is neutral and also consists of a group of atoms which have been covalently joined . It is common to find it in organic substances and they form the majority of all the oceans and rivers of the planet, the atmosphere and the oxygen itself.

What is the mass number?

Who was Dimitri Mendeleev?

What is Pascal’s principle?