The monosaccharide also known as simple sugar , are any of the basic compounds serving as basic components of carbohydrates . Monosaccharides are polyhydric aldehydes or ketones ; that is, they are molecules with more than one hydroxyl group (-OH) and one carbonyl group (C = O) at the terminal carbon atom (aldose) or at the second carbon atom (ketosis). The carbonyl group combines in aqueous solution with a hydroxyl group to form a cyclic compound ( hemi-acetal or hemi-ketal). The resulting monosaccharide is a water soluble crystalline solid . 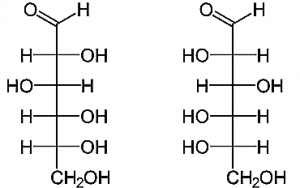 Monosaccharides are the simplest carbohydrates that we can find and are chemically made up of a single chain of polyalcohols with an aldehyde or a ketone group, so they cannot be decomposed by hydrolysis .

The main characteristics of monosaccharides are:

They are made up of carbon chains of 3 to 12 carbon atoms . These chains are named by adding the suffix – ose to the prefix that indicates the number of carbons in the molecule. The most abundant and of greatest biological importance are the trioses , pentoses and hexoses .

Most have asymmetric carbons, which means that they have carbons attached to four different groups.

Monosaccharides have three to seven carbon atoms1 and their empirical formula is known as (CH2O) n, where n ≥ 3.

Monosaccharides have a solid consistency and are crystalline or white in color . They have a sweet taste and are soluble in water. They have among their properties the ability to have spatial or optical isometry . The number of isomers that a monosaccharide has will depend on the number of asymmetric carbon atoms that its molecule has.

They have optical isomerism so they are optically active since they can rotate the plane of polarized light.

Monosaccharides have different chemical properties, for example, they are molecules that have a high degree of radioactivity . All of them are soluble in water, and very little in ethanol, in addition to being insoluble in ether . They have a reducing power due to their carbonyl group reducing characteristics and their reaction to reagents such as Tollens, Benedict or Fehling, form the first property gluconic acid product used in reducing sugars in urine .

They can also produce glycosides when a monosaccharide reacts to alcohol. This chemical reaction can also happen between two monosaccharides, giving rise to a disaccharide.

Some of the uses that can be given to monosaccharides are:

Some foods that have monosaccharides are:

Among the examples of monosaccharides that we can cite are:

Inorganic compounds with Definition, Characteristics, and Types their Examples

What is the law of mass action?