When it was discovered in 1801 it was named columbio, in honor of Christopher Columbus , as it was part of a mineral sample brought from America to England.

For some time columbium (Cb) and tantalum (Ta) were considered the same element, until after many difficulties the differences between them were identified.

The columbium was then, due to its similarity to tantalum, called niobium, a term derived from Niobe, daughter of Tantalus, who is a character in Greek mythology condemned to eternal frustration and son of the god Jupiter . In the metallurgical industry in the United States, niobium is still called columbium. 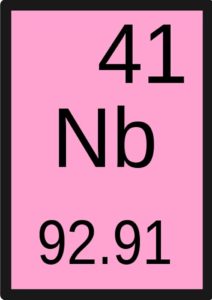 It is a refractory metal, so it resists very high temperatures without melting or decomposing. When it is molten, it can be mixed in any proportion with the iron.

For this reason it is used in the production of steel for various applications, including the aviation and aerospace industries. It is also used in bone implants due to its biocompatibility with living tissues.

The electron configuration of this element is:

This configuration explains that its firmer oxidation state is +5, since when it loses 5 electrons from its outermost shells (4 d 4 5 s 1 ) it acquires the stable configuration of the noble gas krypton (Kr). However, it also has other valences.

The crystalline structure of niobium is cubic centered, which means that 8 atoms are located forming a cube and in the center of this there is also an atom.

When it is in a liquid state , that is, molten, it is completely miscible with iron. It is insoluble in water.

It has a high resistance to corrosion and many chemical substances. For this reason it is very resistant to acids, however, it is attacked by hydrofluoric acid (HF) and reacts vigorously with a mixture of this with nitric acid (HNO 3 ).

It dissolves slowly in molten sodium hydroxide (NaOH) or potassium hydroxide (KOH), but is resistant to ammonia (NH 3 ) solutions .

The +5 oxidation state is the one that generates the most stable compounds of this element, such as fluoride, tartrate, oxalate and peroxide. However, it also has compounds with other valences.

Depending on its purity, it can be very ductile, that is, it can be easily subjected to deformation, even allowing wires to be obtained. However, as the elongation of the material increases, it becomes harder and stronger, losing ductility, but without being brittle.

It is a highly heat resistant material, withstanding very high temperatures without melting or decomposing, maintaining its mechanical properties, therefore it belongs to the class of refractory metals.

It has superconducting properties, which means that when cooled below a certain temperature, it offers no resistance to the passage of electrical current, becoming a perfect electrical conductor.

The most important sources of this element are the minerals columbite, also called niobite or ferrocolombite, and pyrochlorine. Columbite also contains tantalum (Ta), so the Nb must be separated from this metal.

One of the extraction methods is based on the difference in boiling points between Nb and Ta chloride. It begins by treating the mineral with chlorine gas (Cl 2 ), so that the chlorides of the metals are formed.

Then a distillation is carried out; tantalum chloride (TaCl 5 ) has a boiling point of 236 ° C, while NbCl 5 boils at 248 ° C. Therefore, when the mixture is heated, the tantalum chloride is recovered first and then the niobium chloride.

Nb is also generated as a by-product during tin extraction.

In the metallurgical industry

It is very useful in the manufacture of steel, in which at high temperatures it combines with carbon and nitrogen to form very fine particles of niobium carbide (NbC) and niobium nitride (NbN).

It also increases the mechanical resistance of alloys, especially at low temperatures, making it useful in the aviation industry, where it is used in rockets and jet engines. As an additional advantage in this application, among the refractory metals it is the one with the lowest density .

Its alloys are used in beams for building structures and oil extraction platforms , and in gas and oil pipelines. Some of the niobium alloys with chrome moly steel are used in high temperature applications such as kettles.

It also has utility in wear and abrasion resistant tool steel. And due to its high ductility, it can be used in forming processes, among which we can mention pressing, bending and stamping.

These magnets are also used in nuclear magnetic resonance equipment for the analysis of structures of chemical compounds and in magnetic resonance imaging scanners, which are used to obtain internal images of the human body for medical diagnostic purposes.

In glasses for lenses

Niobium oxides are added to corrective lens glass preparations to increase their refractive index and allow thinner glasses to be made.

Through the anodizing process, a dense layer of oxide with certain substances is applied to this metal, which allows it to shine with attractive colors and in this way decorative wires are manufactured and also inserted on coins.

It is also used in materials that are used for bone implants, because it is highly biocompatible with the tissues of the human body.