Nitrogen cycle an overview the  main points and human effects on it will be discussed here in detail first we study it’s main points :

Nitrogen is so ubiquitous that it makes up almost 78% of the atmosphere, contrary to the popular belief that oxygen is the air.

It is necessary to know that the large presence of nitrogen around us does not necessarily mean the possibility of benefiting from it, because our bodies and the bodies of animals and plants do not have the ability to convert nitrogen into a form that can be taken advantage of, we do not have the appropriate enzymes to capture or fix nitrogen from the atmosphere.

However, our DNA and proteins contain a lot of nitrogen, so where does it come from? It comes from bacteria in our natural system.

Bacteria play a major role in the nitrogen cycle an overview of it:

Bacteria and other single-celled cells such as prokaryotes introduce nitrogen to our world by means of a nitrogen fixation process that transforms nitrogen from the atmosphere into biologically usable forms. Some of these bacteria live freely in soil or water, while others are symbiotic in plants.

Nitrogen-fixing microorganisms capture it from the atmosphere and convert it to NH3 ammonia that the plant can use and convert into organic compounds or molecules, and then move to animals when these plants are eaten, and here they merge into the animal’s body and subsequently disintegrate in the form of waste such as urea in urine .

Nitrogen does not settle in the bodies of living things forever. Rather, it is converted from organic nitrogen to N2 gas by bacteria. This process involves many stages within the terrestrial ecosystem, where nitrogen compounds convert to NH3 ammonia from dead animals or waste, and then convert ammonia To nitrates and nitrites. Finally, the prokaryotes perform the denitrifying process and return the nitrates to the N2 gas.

Beyond the natural nitrogen cycle in terrestrial ecosystems, roughly similar steps occur in the marine nitrogen cycle, there: ammonification, nitrification or ammonia oxidation and denitrification. All of these processes are done by bacteria and marine plankton. 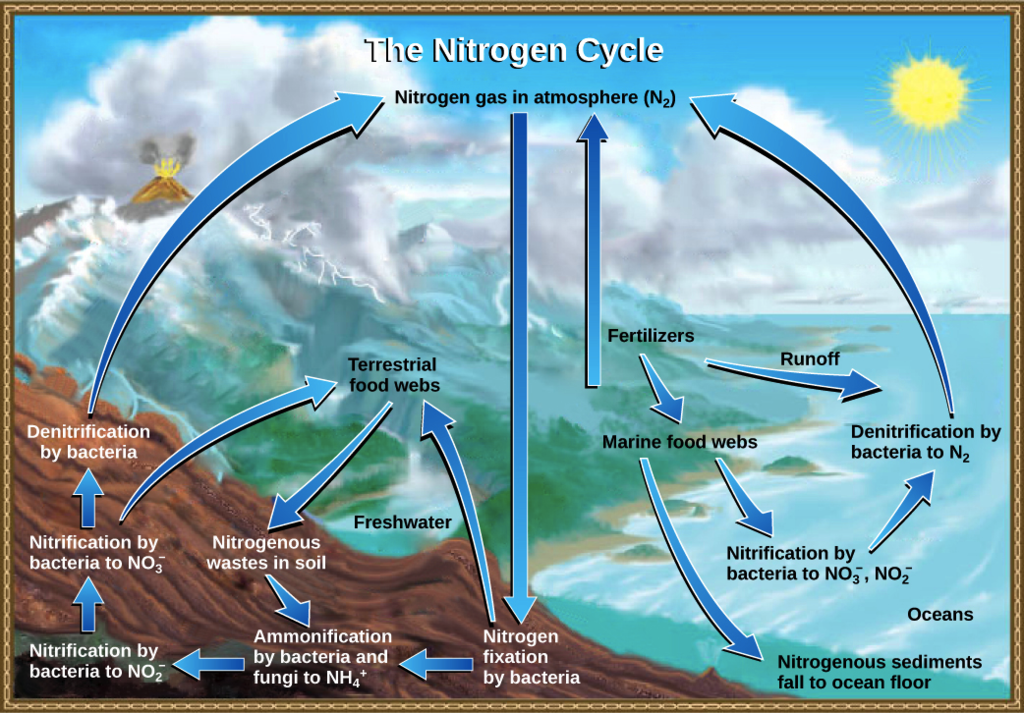 Some compounds containing nitrogen fall to the ocean floor in the form of sediments, and over long periods of time these deposits become sedimentary rock, and later the geological uplift or geological uplift may move sedimentary rocks to the surface of the earth. In the past, scientists were unaware of the importance of these rocks for terrestrial ecosystems as a rich source of nitrogen. A new study indicates the importance of the gradual release of nitrogen to plants by breaking up these rocks or interacting with the weather.

Nitrogen is a limited nutrient

Many processes such as primary production or decomposition in natural ecosystems are related to the amount of nitrogen supply available. This means that nitrogen, which is a limited nutrient and has few sources, controls the growth of organisms and populations.

How is it known whether nutrients are limited?

This is done through the following tests:

For example: When we add nitrogen to half of the bean crop and we notice an increase in its growth from the rest of the crop, we conclude that the nitrogen component is limited, but if we do not notice a slight difference, this means that nitrogen is not limited and there are other elements that are limited or incomplete. Nitrogen and phosphorous are limited elements in natural ecosystems, so we note that many of them are present in fertilizer containers.

Human activity has an effect on the nitrogen cycle an overview :

We may not be able to biologically convert nitrogen, but we humans created the method artificially. The Haber-Bosch process is an industrial method for producing ammonia from nitrogen and hydrogen, which is the main method for producing NH3 ammonia by combining three molecules of hydrogen with a nitrogen molecule at very high temperatures.

About 450 million metric tons (every 1 metric ton = 1000 kg) is produced from fixed or processed nitrogen by this important chemical process. These quantities are used in fertilizers used for agricultural fields, meadows, and others.

Human activity contributes to the diffusion of nitrogen into the environment through two processes:

Nitrogen-containing fertilizers are used in agriculture as well as burning fossil fuels.

Both processes increase the volume of nitrogen substances in the atmosphere. In addition to N2 nitrogen gas, increasing the volume of nitrogenous compounds in the atmosphere is linked to harmful effects such as: acid rain like nitric acid or HNO3, and the contribution to increasing the greenhouse effect or greenhouse effect through nitrous oxide N2O.

As for fertilizers that contain nitrogen and phosphorous used in agriculture, they also have harmful effects, as runoff of surface water offsets of these materials to leak into rivers and lakes, causing water fortification or eutrophication in fresh water, this leads to excessive growth. Bloom, algae, or microorganisms. Prior to this the growth of these organisms was related to the limitations of nitrogen sources.

This eutrophication process reduces the amounts of oxygen present in the water especially during the night, as algae and other microorganisms or bacteria consume large amounts of oxygen in a process called cellular respiration which leads to a decrease in the numbers of other organisms in the affected ecosystems such as: fish and shrimp, They are called depleted areas of the species or what is known as dead zones.

You may also go through this one

What is fog definition,types and causes?

Facts you never knew about rain?

What is green chemistry explain?

What is the salinity of sea water?

Tips to save fuel while driving?