In the cells of living beings it is possible to find different types of biological polymers or macromolecules which play a fundamental role in the development of organisms. One of these important macromolecules is known as nucleic acid , a long molecule made up of smaller molecules called nucleotides . 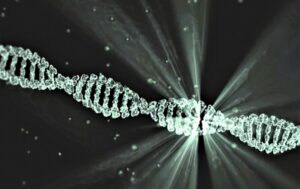 What is nucleic acid?

Nucleic acid is a type of polymer that is responsible for carrying all the cellular information that gives rise to the different hereditary characteristics that living beings have and that contain the information necessary to determine the functions of the proteins that are considered vital.

Among the main characteristics of nucleic acids, the following are mentioned:

There are two important types of nucleic acids:

It is a type of polymer that turns out to be essential for life. It is within the cells and the virus is a type of complex protein within which stores all the information type gene of a given individual. It also contains the necessary instructions so that the proteins that make up an organism can be synthesized correctly.

It is also made up of basic units which are known by the name of genes and are responsible for hereditary transmission . All DNAs are different and unique and their content is fundamental to life.

This is an essential nucleic acid for life because it has the function to synthesize the protein and transferring the genetic inheritance of one individual to another. It is located in the internal part of the cells of both prokaryotic and eukaryotic beings . His discovery was of utmost importance for life because through his study the thesis on the origin of life arose. There are also three different types of ribonucleic acid: messenger , transfer, and ribosomal .

The fundamental structure of nucleic acids is based on an ordered sequence of nucleotides which are composed of a pentose , a phosphate group and a nitrogenous base . The nucleotides it contains are joined by means of a bond which is known as the phosphodiester bridge and in this way they manage to form a series of polynucleotide chains which in turn give the acid backbone its shape .

Both RNA and DNA phosphate group has the same shape , but there are some differences in the nucleobases and the molecules of sugar . The five elements necessary to build a nucleic acid chain are carbon, hydrogen, oxygen, nitrogen, and phosphorus.

For the nomenclature of nucleic acids, the identification of each of the nucleotides with three capital letters is commonly used . The first letter will correspond to the nitrogenous base in which the nucleotide is contained , the second letter will be responsible for indicating whether it is a momo , di or triphosphate . The third letter will be the initial of the phosphate group and for this a letter P is used and finally, in the case of deoxyribonucleics , a lowercase letter “d” must be prepended. before the three letters.

They can also be named by placing the word acid at the beginning and then placing the name of the nitrogenous base and finally the ending ” ilic “, although this type of nomenclature is already considered old because it does not allow to observe the amount of phosphates that are present in the nucleotide.

Its most outstanding chemical properties are mentioned below:

Nucleic acids are found integrated into the cells of living beings and are obtained through the transmission of genetic information . Obtaining nucleic acids is one of the early stages in the study of biology molecular order to be able to analyze the different changes in the gene .

In order to obtain them, it is first necessary to perform a cell lysis , in other words, to inactivate the cell nucleases in order to then proceed to the separation of the nucleic acids from the other cells. There are several types of cell lysis that can be performed, for example:

The uses or functions of nucleic acids are closely linked to the storage and transfer of genetic information from one living organism to another. They are responsible for being able to encode all the information that a cell may need for the manufacture of proteins. They actively work in cells collecting and storing all kinds of information and are responsible for duplicating DNA as well as expressing genetic messages.

Its main risks lie in its use as a type of vaccine and although it is premature to formulate guidelines for nucleic acid vaccine manufacturing requirements. The main safety problems posed by this type of vaccine are the possibility of tumorigenic transformations in the recipients , the possible formation of anti-DNA antibodies and the unexpected and adverse long-term effects of a foreign antigen.

Another risk is that high levels of extracellular nucleic acids can be produced in the bloodstream, mainly due to the presence of some diseases , aging and degenerative disorders that are mainly related to cancer, age and acute inflammatory diseases. Circulating nucleic acids can have detrimental effects on the host and be implicated in aging and various acute and chronic human pathologies .

What is inorganic chemistry?

What is a triple covalent bond?