How is oil refining works?

Oil refining and process involves in oil refining plants is listed below you can easily find it.Refining is a set of operations and treatments (mechanical or chemical) which improve the characteristics of a product and produce a commercial product from a raw product.

The oil crude – or crude oils since it are many types (black, brown, viscous fluids) – can not be used as such. It must undergo refining operations.

In this case, this term designates all the transformations ( distillation , cracking, desulphurization, etc.) that the crude oil undergoes at the outlet of the wells.

Operations that make it possible to separate the different cuts of oil which will then be transformed into various intermediate products (naphtha, for example, a basic ingredient in the manufacture of plastics ) or marketable (gasoline, diesel, etc.).

Refining of paper and metals:

Refining operations are also carried out in the paper industry. They correspond to a mechanical treatment ( compression and shearing) applied to the pulp and aim, for example, to improve the printability properties of the papers.

The metal can, too, undergo refining operations (distillation and electrolysis ) to remove the maximum trace impurities. 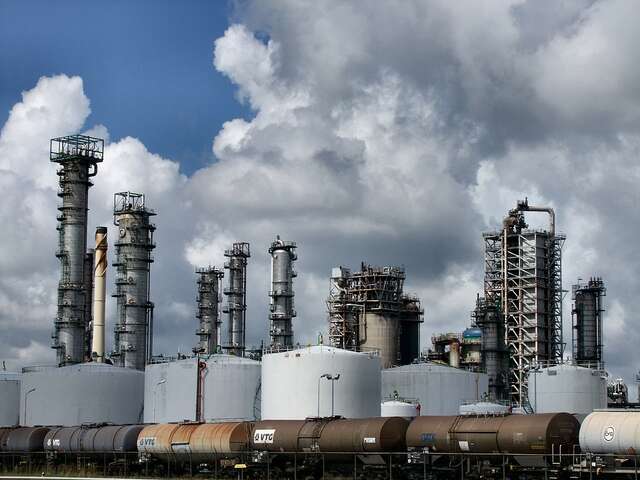 Once extracted from underground, petroleum must be refined before its derivatives can be put on the market.

The composition of crude oil:

The oil crude is composed of 85% carbon and 10% of hydrogen . For the rest, it contains various impurities ( sediment , water, salt, sulfur and nitrogen ) that should be removed during refining to avoid any corrosion or fouling problem and to meet regulatory constraints.

The oil crude contains, in varying proportions, four types of hydrocarbons that influence the quality of the final products:

The distillation unit operates at a temperature of around 360 ° C and a pressure of around 2 bar . It separates the crude oil into different cuts which will form the basis of the final products.

The lower the number of carbon atoms and the lower the boiling point, the higher the compounds will be in the distillation column. From top to bottom, we therefore find:

The residues are treated under vacuum in a second distillation column to produce industrial lubricating oils, paraffins, heavy fuel oil and bitumen.

After distillation, the proportion of heavy hydrocarbons generally remains high in view of the commercial demand for lighter products. The heavy molecules are therefore broken into several lighter molecules. This is called the cracking operation. It generally takes place at about 500 ° C and in the presence of a catalyst . This operation is relatively energy intensive.

Products that need to be improved:

In general, the products resulting from these first two stages will have to undergo additional treatments before they can be marketed.

The gasoline cut, for example, must go through a step of reducing its sulfur content, which must be zero to meet European constraints. The operation takes place in a reactor at temperatures around 400 ° C and at a pressure between 40 and 80 bars. Under these conditions, hydrogen injected into the mixture reacts with the sulfur atoms to form hydrogen sulfide which can then be removed. It is also necessary to increase the octane number of this gasoline cut. To do this, the product is injected into a reforming unit. At a temperature of 500 ° C and a pressure of 20 bars, the paraffins and naphthenes are then transformed into aromatics with a higher octane number.

A brief History of phosphorus?

How to find radiochemistry jobs ?

Why does an eraser erase the pencil ?

How does a water battery work?

What are the Facts about oxygen?