The osmium is a chemical element located in the group of metals of platinum Groups 8-10 (VIIIb), periods 5 and 6 of the periodic table and is considered the element naturally more dense earth. It is a gray-white metal, very hard and strong, difficult to work with, even at high temperatures. Of platinum metals is the point of merging more high , so that melt it is very difficult. The alloys obtained from osmium are very resistant and must be treated before carrying out work with it because in its pure state it cannot be modified, for this reason it must be melted or madedust . 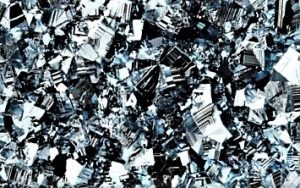 The osmium is a chemical element in the form of metal located in groups 8 to 10 of the periodic table. It is considered as the densest and hardest element on earth, so much so that in order to work with it it must first be melted or crushed .

It was discovered by the British chemist Smithson Tennant in 1803. At that time, osmium and iridium were identified in the black residue that remains after dissolving platinum mineral with water, a mixture of 25% nitric acid (HNO3) and 75 % Acid Hydrochloric Acid (HCl). Osmium comes from the Greek term osme , which means smell and odor.

Smithson Tennant  discovered it in 1803.

The alloys that can be obtained through the union of osmium with other elements such as rhodium, ruthenium , iridium or platinum are used in the manufacture of fountain pens, compass tips , phonograph needles , electrical contacts and instrument pivots. They are used in the creation of these materials due to the extreme hardness of this element and its great resistance to corrosion . Osmium tetroxide, OsO4, is highly toxicFor people, concentrations in the air as low as 10-7 g / m3 can cause lung congestion, skin damage, and serious eye damage, for this reason it should only be handled by suitably qualified chemists . It is prepared by quite complex chemical processes from platinum ores in which it is found in a very small proportion and as a by-product in the osmium-rich ores of nickel and copper ores.

This element can be obtained in sands that contain platinum , iridium and a small amount of other metals. After carrying out an extensive process of enrichment of the sands, it is treated with aqua regia, and in this way platinum is obtained. It must then be separated from ruthenium by reduction with alcohols and precipitated in the form of OsO4. Purification is carried out by means of distillation .

What is magnesium phosphate?

What is the general gas law?