In order to fully understand wat oxysalts are , it is necessary to understand the chemical concept of salt. This is a type of compound that is formed thanks to the bond that occurs between cations and anions , a process that generates a reaction from the acid and the base . Oxysalts are basically a type of salt and are born when the combination between an oxacid acid and a hydroxide is made , in other words between a metal and a radical . The result of this combination is what is known in the area of ​​chemistry as oxisal , oxosal oroxacid salt , names by which it is also known. 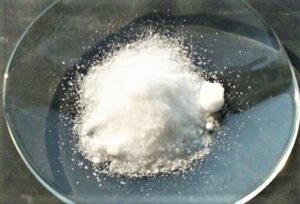 The oxysalts are a number of chemical compounds which are formed by a metal and radical which contains oxygen. They are the product that results from the neutralization reaction that occurs between a certain oxyacid and a base.

Its main features include the following:

The types of oxysalts that exist are the following:

Its formulation, in other words, the nomenclature of oxisal, follows a series of rules that involve situations such as the following:

In this way, there are several types of nomenclature, which are:

Oxysalts are made up of a metal, a nonmetal, and oxygen molecules. Its formula is M a (X b O c ) n ,

Oxysalts have a large number of uses, all of them important but they stand out in the pharmacological , industrial and practical fields . Many can be found naturally in the crust of the earth. They are compounds widely used in the field of chemistry and laboratories as well as in the agricultural industry because they act perfectly well as direct fertilizers in the soil. They also participate as a residual product in the manufacture of some materials such as nylon . Some of them, such as magnesium phosphate, are used as medicinal products mainly to combat muscle pain, menstrual pain and contractures.

Many are also used to cause the sedimentation of residues in water tanks that have not been subjected to the purification process and some are even used as water purifiers , in treatments against anemia and to increase iron levels in food. Sodium hypochlorite is an oxisal widely used mainly as a kind of bactericide and disinfectant , to treat sewage and to whiten surfaces and clothes.

They are also used as calcium supplements, in the production of glass , cement , as an antacid and coagulant . Hydrogen peroxide needs oxysal barium sulfate to be formulated, as well as it is necessary in X-ray rooms because it has opacity to radiation.

Oxysalts are products of great importance especially for industry, society and even the health in general of human beings. They are necessary to be able to maintain, preserve and preserve food and for a series of technological and environmental processes.

Some well known examples of oxysalts are mentioned below:

What is potassium hydroxide?

What is Pyrex glass?