The principle of Pascal ‘s law or a statement that was prepared by the physicist and mathematician of French origin Blaise Pascal and tells us that the increase in pressure applied to a surface having an incompressible fluid that is contained in a container non-deformable, it is transmitted with equal value to each of the parts of the container. 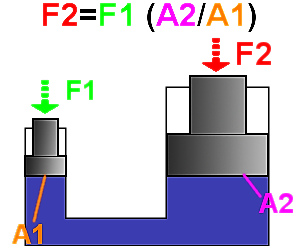 What is Pascal’s principle?

This principle or law of the branch of physics  tells us that when a certain pressure is applied to a fluid that is in a container, the same value will be distributed to each of the parts that make it up.

What does Pascal’s principle consist of?

This principle consists in the explanation that is made of how the pressure exerted by a fluid that is in equilibrium and that cannot be compressed, housed in a container in which the walls are not deformed, is transmitted with the same intensity in all the points of said fluid regardless of direction.

Blaise Pascal Blaise Pascal invented the first mechanical calculator in 1642 and succeeded in showing through an experiment in 1648 that the level of the mercury column of a barometer was determined by the increase or decrease exerted by pressure surrounding atmospheric . This discovery verified the hypothesis that the Italian physicist Evangelista Torricelli already had regarding the effect that atmospheric pressure had on the balance of liquids. A few years later, working with the French mathematician Pierre de Fermat , Pascal managed to formulate themathematical theory of probability , which has become of great importance in actuarial, mathematical and social statistics , as well as a fundamental element in the calculations of modern theoretical physics .

The statement that defines Pascal’s principle is the following:

The pressure exerted on a fluid that is not very compressible and in equilibrium within a container with non-deformable walls is transmitted with equal intensity in all directions and at all points of the fluid.

The formula for applying Pascal’s principle is as follows:

Pascal’s principle can be used in jobs that require a great effort but that at the same time must be carried out by applying a small force , for example:

Hydraulic lifts are mechanical devices that are used to lift objects that have a lot of weight. The elevators are used with all types of vehicles , from motorcycles to large automobiles, and can be used both in professional environments and in domestic activities .

The hydraulic lift works thanks to Pascal’s principle, which tells us that “the pressure exerted on a fluid that is not very compressible and in equilibrium within a container with non-deformable walls is transmitted with equal intensity in all directions and at all points of the fluid. ”.

They use the principle by combining two cylinders of different sizes, one small and the other large, to be able to exert an increase in pressure and in this way to be able to lift objects that are very heavy. Thanks to this, the energy needed to lift the load is transmitted by a pump with an electric drive motor that transmits a hydraulic fluid to a cylinder , which acts directly or indirectly to cause the ascent.

The importance of this principle lies in the relationship between the pressure and the depth of a fluid, or in the height of the fluid column, from a reference value. It is important for its validity in the case of compressible fluids that vary with pressure.

Everything related to atmospheric pressure , use of barometers, pressure in pools, seas, lakes, calculation of submerged structures, such as dams, submarines, and even airplanes is based on Pascal’s principle. Pascal’s principle also allows an explanation to be given to Archimedes’ principle .

The hydrostatic is based on this principle and is very important in calculations of structures and devices that are part of the activity of man.

Pascal’s principle can be tested when we use, for example, a hollow sphere , which has been drilled in different places and provided with a plunger . When the sphere is filled with water and some kind of pressure is exerted on it by means of the plunger, it can be observed that the water comes out of all the holes with the same speed and therefore with the same pressure .

The following is an example that can be applied to explain Pascal’s principle.

An example of Pascal’s principle is as follows:

We calculate the pressure:

We calculate the applied force:

By means of Pascal’s principle it has been possible to verify that when a pressure is applied to a liquid that is enclosed in a container and that is in a static way , it can be distributed in a uniform way to all the particles of the fluid and to the walls of the container that contains it. In this way he explains to us how an object that has been submerged in a fluid experiences a thrust of equal magnitude to the weight of the object.

What is an alloy?

What is a displacement reaction?