If you’ve ever read the components of a soda can, you’ve likely seen the name phosphoric acid . Also known by the name of orthophosphoric acid , it is one of the most used by the industry and its use in excess could lead to serious health problems . It is a bright and transparent liquid that can have many uses such as in the case of detergents, fertilizers, water treatment and in food and beverages. 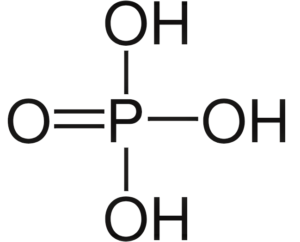 What is phosphoric acid?

Phosphoric acid is a type of chemical compound that is in the group of oxacids which is relatively weak when it is at room temperature . It is an important source for the agriculture and beverage industry.

Phosphoric acid is a liquid that have a number of characteristics. Some of them are the following:

The structure of phosphoric acid is based on one P: O bond and three P-OH. The last bonds are those carried by the released hydrogens when they are in a dissolution medium . The phosphorus atom is located in the center and the rest of the oxygens form a kind of molecular tetrahedron .

The chemical formula of phosphoric acid is as follows: H3PO4 .

The nomenclature of this acid depends on the ternary salts of oxoacids and, because the P atom has a valence of +5, the acid suffixes the suffix – ico to the prefix phosphor -.

Its main physical properties are:

Among the main chemical properties that can be found in phosphoric acid, the following are mentioned:

Phosphoric acid is normally found in foods such as meat , beans , fish, and eggs . Many foods that are consumed and that are canned in factories include this type of mineral in their ingredients. It can also be manufactured by means of a series of thermal or humid processes and in these cases, the result obtained is used mainly in the production of fertilizers. The main and major source of phosphoric acid is apatite , a phosphate mineral.

Phosphoric acid is a mineral that can help the proper formation of bones and teeth , supports the function of the kidneys in appropriate doses recommended by a doctor and also makes the muscles of the body can have a much faster recovery later they have been exposed to heavy training. It is also one of the fundamental components in the formation of DNA and RNA , codes of utmost importance for living beings.

It can be used to remove rust from metals when they corrode.

In the human body it is common to find phosphorus and for that reason, it does not need large amounts of the mineral to enter the body, however, many people take it uncontrollably and without the approval of a doctor and this can cause a series of problems of Health. An excessive intake of phosphoric acid could lead to different types of heart complications and could also increase the risk in women, mainly of suffering from osteoporosis .

In high doses, it has the ability to negatively interfere with other types of minerals such as magnesium and iron, causing other types of dangerous pathologies such as anemia . When in contact with other chemicals, it can be toxic , cause skin irritation, and significantly affect the respiratory system .

Many people tend to ingest high doses of carbonated soft drinks per day, and these include phosphoric acid in their ingredients. When taken constantly, the level of the mineral increases considerably in the body, causing the kidneys to not be able to eliminate them properly and this could damage these organs at some point. In rare cases, when it is in the form of spray, can cause nasal irritation and throat , pain in the chest and breathing problems . Depending on its concentration, contact with the skin could cause tissue damage or severe burns.

When phosphoric acid comes into contact with the environment, it is transported through the air in the form of a mist . This mist is subsequently deposited on the ground and some of its minerals, mainly carbonates, remain free reaching the water table and contaminating the waters. When this happens, fish toxicity occurs, killing aquatic life and destroying river plants.