The plutonium , element which gets its name from the dwarf planet Pluto , was discovered by the Nobel Prize in Physics, Enrico Ferni . It is an element that belongs within the periodic table to the group of transuranic and actinide elements, and it is also worth mentioning that it is an element with extreme radioactivity . 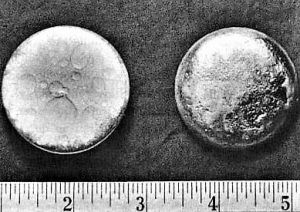 Plutonium is an element on the periodic table that belongs to the series of elements called actinides . It is a fairly active material and can form compounds with all metallic elements .

The main characteristics that we can mention are the following:

Despite having made the discovery of plutonium, it was kept secret for a time. It was named after the planet Pluto was named , having been discovered directly after Neptunium. The story begins with Enrico Fermi , who was a Nobel Prize winner in Physics and who at first thought that he had discovered element number 94 in the table, which he called hesperium.. However, a long time later he realized that it was not a new element, but rather a combination of barium, krypton and some other elements in lesser quantities. In 1941, the first form of plutonium was formed, which was created by a group of scientists from the University of California.

It was discovered in 1941 by Doctor and scientist Glenn T. Seaborg and Edwin McMillan, Kennedy, and Wahl by means of a bombardment of uranium deuterons in the 60-inch cyclotron of the Berkeley Radiation Laboratory of the University of California, Berkeley .

Plutonium metal has a silvery appearance and can turn a yellow tarnish when slightly oxidized . It is a metal that is chemically reactive . A relatively large portion of plutonium is warm to the touch due to the energy emitted in alpha decay. Larger pieces can produce enough heat to bring the water to a boil. Metal dissolves easily in concentrated hydrochloric acid, hydroiodic acid , or perchloric acid. The metal has six different allotropic modifications and each of them have different crystalline structures. Plutonium has several isotopes , but the most important is plutonium-239 that forms in nuclear rectors. It has the ability to capture neutrons to form isotopes even larger than plutonium.

What is plutonium for

Plutonium-239 is used mainly in the creation of nuclear reactors and in nuclear fuel . It is an important agent in the creation of nuclear weapons . It can be used as a thermoelectric heat generator and has also been used in the manufacture of pacemakers . As plutonium is created, inside the fuel of nuclear reactors, it fission , thus producing energy . During the process, other isotopes of this element are also originated; some can absorb neutrons and others are fissile isotopes. Plutonium has been used in explosivesfor a long time. Large amounts of plutonium have been released in atmospheric tests of nuclear weapons, which subsequently fall and settle on the ground.

It is a very radioactive and toxic element . It has been described as the most toxic substance for humans but there are substances that are much more toxic. The main type of radiation that it emits is alpha radiation and this does not pass through a sheet of paper, that is, a thin layer of a material can stop the radiation. It does not have the ability to penetrate the skin. What makes it really dangerous is its radio toxicity . The alpha radiation that it emits when ingested or inhaled can cause lung or other cancers depending on where it is deposited in the body. In considerably larger quantities they can cause poisoning.acute from radiation and death if ingested or inhaled. When breathed in, it can stay in the lungs or move to bones or other organs. It can stay in the body for a long time and continuously exposes the body’s tissues to radiation . After a few years this could result in the development of cancer. It can affect the ability to resist disease and the radioactivity of plutonium can cause reproductive failure .